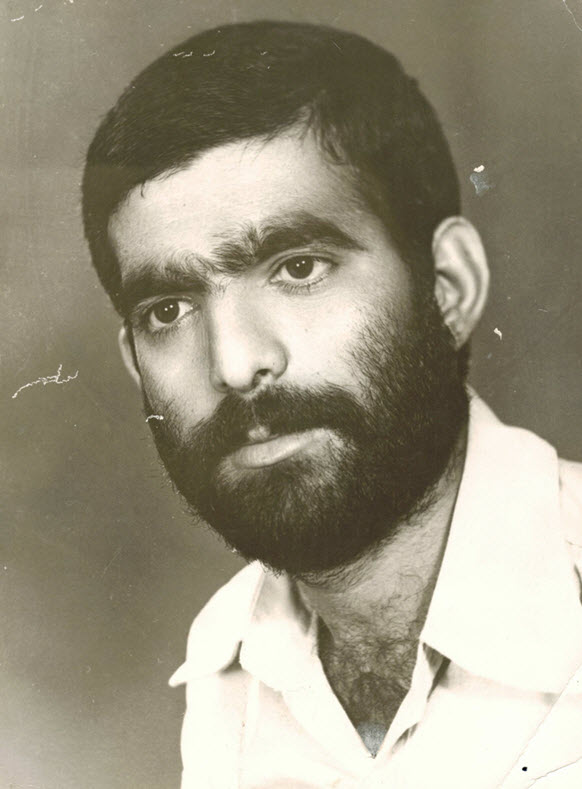 Ali Abdolizadeh was born on July 17, 1956 in Bandar Abbas in a family of 9. His father was an employee of the Gendarmerie and his mother was a housewife. As a child, he was a quiet boy, learning how to respect elders under the teaching of his mother. His talent in making friends and proper manner of etiquette had made him popular among his peers.

After finishing high school, Ali Abdolizadeh was accepted in the major of Civil Engineering at the University of Zahedan. Those days were concurrent with the rise of the Iranian struggle against the Pahlavi regime. Brought up in a religious family under the teachings of Islam, he could not bear the oppression of Pahlavi regime, thus joined the revolutionaries to help the oppressed people.

After the Islamic Revolution and with the outset of the Cultural Revolution, Ali had to abandon his studies temporarily to serve as a teacher in Sorkhoon village. At that time, this village was one of the poorest regions of Bandar Abbas.

Abdolizadeh was competent enough to assume greater positions, but he chose to be sent to the warfronts, but due to his integral role at schools and the lack of teachers in the Office of Education, his request was not granted. Gradually, his moral qualities significant role in the area made him a target of counter-revolutionary groups such as Peykar, and they plotted to make away with him.

The terrorist group had three attempts at his life, but each time they failed until finally on January 8, 1982. On this day, Abdolizadeh together with a friend of his was on his way to the house of a preacher in Bandar Abbas to discuss the cultural plans for Vahdat Week when he came under attack by the terrorists. His car was machine-gunned by four terrorists, one of whom was a childhood friend of Ali, and they left the scene cowardly. The body of Ali was transferred immediately to the hospital, but despite the effort of doctors, he died of the injuries caused by 18 bullets in his body.

After the martyrdom of Ali, his brother sent a message to the members of the terrorist groups fighting against the Iranian people saying, “Come back and join the people. Don’t seek shelter in the arms of the US and its allies, or one day you will be brought to the justice of Iranians, as the wicked US has been brought to their justice in these days.