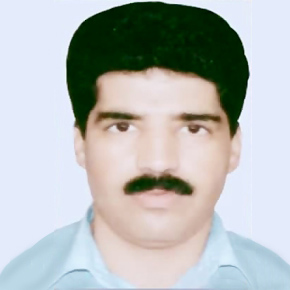 Moslem Keykha was born on August 31, 1973, in the village of Vermal in the vicinity of Zabol city. His father was a janitor of a school in their village and his mother was a housewife.

Growing up in a religious and hardworking family, he had to move to another nearby village to continue his studies at the middle school after finishing primary school. At the end of the middle school, he had to drop out of school due to the financial problems of his family and move to Zahedan where he began working as a sales assistant in a relative’s shop.

Moslem was called into military services in 1991. He served as a soldier in the garrison until noon and then began working in the afternoon. After a while, he found a job at the Transportation Unit of Zahedan University of Medical Sciences. He married in 1999 and fathered two children.

Moslem was a funny and patient man, who had a tendency to help the poor and the impoverished people. Brought up in a religious family, he fulfilled his religious duties strictly and had great respect for his parents.

In the morning of February 9, 2007, as preparing to go to work, he suddenly heard the sound of an explosion strong enough to shatter all glasses in his house. He rushed out into the street only to find that the members of Jundallah terrorist group had exploded the vehicle of IRGC members. Meanwhile, he identified three members of this group who were on the run, attempting to block their escape by holding one of them. The terrorists shot him 7 times, but he resisted until the law enforcement officers came to his aid and the terrorists had no escape route.

Police officers in cooperation with the people took the wounded to the hospital. Moslem was transferred to the operation room immediately, but he died as a result of excessive bleeding, joining the long list of Islamic Republic martyrs.