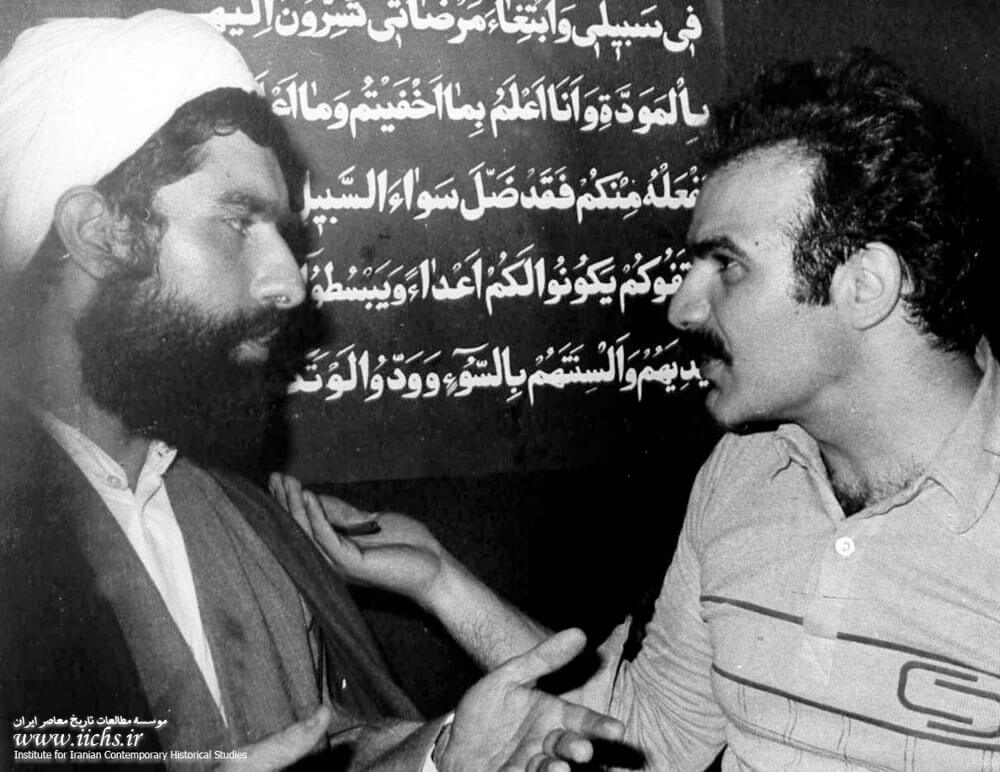 When members of the Mojahedin Khalq Organization (MKO) announced their intention to become Marxists, the question posed as to whether this happened due to the penetration of eclectics or the organization had fundamental problems from the beginning.

"Hanifnejad, while he was a student at the Agricultural University, came forward to the lecture table at one of the meetings of the Islamic Association to deliver speech. Eventually, his lecture reached a point that was forever etched in my mind: He had a Code of Practice in hand. He opened it and read an istifta (religious question). I think it was Ayatollah Shariatmadari's Code of Practice. He read the istifta, which was about the woman. He went on to say, "Is it possible to fight the regime with such a view?" "Do we need a different approach?"
Taghi Shamekhi, a student at the University of Agriculture, a contemporary of Hanifnejad (Three Allies of Love)

The rise of the Mojahedin-e Khalq Organization in the mid-1940s was welcomed by some religious figures, who in those days witnessed the activities of Marxist groups in cultural and academic environments and inclination of some religious youth toward them. At this time, the emergence of a group which emphasized both on religion and political activity, and was mainly originated from university students and graduates, raised hopes that Muslims would eventually form a group against atheistic groups that could attract young people and prevent their deviation. This issue caused the MKO to be supported by some clerics and the bazaar. However, after several years in 1975 when members of the organization issued a declaration announcing becoming Marxists, this question was seriously posed as to whether this happened due to the penetration of eclectics or the organization had fundamental problems from the beginning. This led to withdrawal of support of the organization by the religious people. This article aims to investigate the ups and downs of the organization's relationship with religious streams.

The Mojahedin Khalq Organization (MKO) was formed in 1965 by six former members of the Freedom Movement of Iran and newly graduates of the University of Tehran: Mohammad Hanifnejad, Saeed Mohsen, Mohammad Askarizadeh, Rasoul Meshkinfam, Ali Asghar Badiezadegan and Ahmad Rezaei. The nucleus gradually expanded from Tehran to other provinces and formed organizational cells in Isfahan, Shiraz, and Tabriz. Badizadegan, Meshkinfam and four new members were also sent to Jordan to receive guerrilla training with the Palestine Liberation Organization. (1)

The main focus of the organization's program to form a new identity for members was on the study of religion, history, and the theory of revolution. The Qur'an, Nahj al-Balaghah, a large collection of Imam Ali's (as) sayings and major works of Ayatollah Taleghani and Bazargan were carefully studied. The program also included the study of contemporary world revolutionary literature, especially the Soviet, Chinese, Cuban and Algerian revolutions, as well as major events in Iranian history, such as the Constitutional Revolution, the Jungle Movement in Gilan, the struggles to nationalize the Iranian oil industry, and The White Revolution. (2)

The MKO’s emphasis on the use of Islamic resources in forming an identity for the struggle, attracted the attention of some clerics and marketers who knew them from the past, and encouraged them to support the organization. The financial aid of the clerics of Tehran to the MKO was so extensive that it came to the attention of SAVAK in late 1972 so that it was questioned during the interrogation of the clerics. In a SAVAK’s report on February 29, 1972 it is stated: “The elements of the so-called Mojahedin-e Khalq Guerrilla Group have not robbed banks to cover the group's expenses and sabotage operations, but they obtain the necessary funds through religious elements. the committee is taking steps to identify the group's financial resources.” (3)

Seyyed Hadi Khosroshahi, the late Iranian scholar and diplomat, also says: "At first, the majority of Muslim clerics and fighters supported the organization and gave them a lot of help in all fields. On the same principle, children and close relatives of clerics joined the organization, or, like us, were a kind of sympathizer.” (4)

Citing the MKO’s popularity among the middle class due to its religious nature, Mohammad Mohammadi (Gorgani), a former member of the Mojahedin, said: “They were not members of the organization, but they were willing to provide facilities. They did not withhold money, house, car, or any other aid that they could afford. For example, marketeers said that although we cannot be as active as you and get into organizational relationships, we can provide the facilities you need.” (5)

Although the MKO had succeeded in gaining the support of the religious due to its religious appearance, the history of the organization reveals the influence of Marxist sources on it so that the Mojahedin had accepted Marxism as a science of struggle. Bahman Bazargani, one of the prominent members of the MKO in the pre-revolutionary period says: “In the scientific atmosphere of that time, we thought that in order to fight against the Shah's regime, we must learn the science of struggle, and we saw Marxism as the science of struggle. However, its idea about the origin of the universe was not science. So, we thought one can both preserve religious beliefs and learn Marxism.” (6)

By dividing members of the organization into the religious and those who had joined the organization only for the sake of struggle, Mohsen Nejat-Hosseini, one of the primary members of the MKO, wrote in his memoirs: “The religious spectrum, while believing in religion, thought that the revolutionary science of the day and lessons of the popular struggles of the new age could fulfil the political will of Iranian people; so, it found it necessary to learn the science of struggle, which was based on materialism. However, since religious could not sacrifice their beliefs for this necessity, they gave in to eclecticism; That is, they accepted both lines at the same time.” (7)

In criticizing the beliefs of the organization, Mohammadi wrote: “Because of the importance of evolution and due to the priority of cognition, attention to revelation and tradition was weaken and sometimes interrupted. Of course, not because the organization denied revelation, but since the system of thought had become so entrenched that there was virtually no need for continuous communication with revelation and tradition. The organization used to solve its problems with the theories of evolution and cognition, and this made the distance from Qur'an as wide as possible.” (8)

Referring to the most important sources that shape the identity of the members of the Mojahedin Khalq, Hosein Ahmadi Rouhani, former member of the MKO, said that they showed how Marxism has affected the organization: Is Man Born of Monkey (Mahmood Behzad); Of Men and Galaxies (Fred Hoyle); The Origin of Life (Alexander Oparin); Where Is Science Going? (Max Planck); Four Essays on Philosophy (Mao); Elementary Principles of Philosophy (Georges Politzer); and Dialectical and Historical Materialism (Joseph Stalin). (9)

The eclectic nature of the MKO as well as its financial and sometimes spiritual reliance on the religious authorities led them to act hypocritically toward religious spectrums. In fact, while trying to attract financial resources from clerics and the bazaar, they were attacking these spectrums in their secret pamphlets at the same time. For example, in the introduction to the pamphlet entitled Historical Bankruptcy of the Petty Bourgeoisie’s Understanding of Islam, while emphasizing on the need for a new understanding of Islam, which should be different from the clergy’s, it is wrote that throughout history, Islam has been diverted by the petty bourgeoisie in line with their own interests. By dividing the petty bourgeoisie into two traditional and non-traditional strata, the pamphlet states that the traditional part feeds on a static and reactionary culture that is the product of its degenerate life. “This class seeks its ideals not in the future but in the past. It wants a society with the least complexity and division; Therefore, the solutions it offers are based on the same simple society.” (10)

This double-dealing performance of the MKO made some religious groups pessimistic about it and persuade them to reconsider their initial approval of the group. In this regard, the MKO’s efforts to obtain approval from Ayatollah Khomeini was failed due to his suspicion toward them and their intentions. "I was in Najaf when one of these people (members of the MKO) came to me. Maybe he would come there for twenty days. He came every day for two hours a day to talk about the Qur'an and Nahj al-Balaghah. It seemed a little strange to me that he was more interested in Qur'an and Nahj al-Balaghah than me as a cleric.” Said Ayatollah Khomeini. (11)

As a final point, by examining the relationship between the Mojahedin-e Khalq and the religious spectrum, it turns out that, despite initial success in attracting a range of religious people, the organization was eventually rejected by the religious due to its eclecticism and hypocritical use of religion. This made them hostile to religious figures, as far as they put assassination of these people on the agenda. As in the case of Vahid Afrakhteh, who was arrested by SAVAK during the Pahlavi era, it is explicitly stated that Taghi Shahram was seriously seeking the assassination of Ayatollah Beheshti. (12)