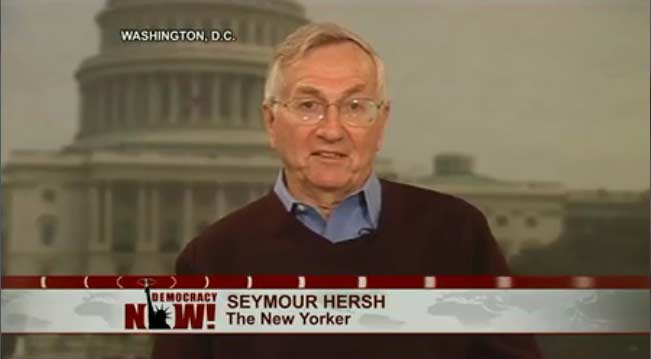 According to a report published by Habilian Foundation, Seymour Hersh said it is very clear that the U.S. still involved as is Israel as was for many years England “in using the MEK and other dissident groups inside Iran as surrogates.”

He went on to say that you don't have to urge them to kill anybody, “they’re very eager to do it themselves inside their country.”

In regard to the bombs used in the assassination of Iranian scientists, Hersh noted, “they are very interesting bombs; they are marine limped bombs designed to blow inside used by (U.S.) Navy SEALs, if they want to blow a ship underwater.” “These kinds of very sophisticated charges have been used by the MEK in the assassinations.”

”It’s not an accident that these kinds of sophisticated weapons can be traced to the Navy SEAL, who are major element of Joint Special Operations Command,” he added.

The most frightening thing, Hersh believes, was that the trainings were in not only communication, cryptography, and small unit tactics but “interrogation tactics, which I presume included the standard sort of stuff that we know American intelligence agencies and CIA have done to the POWs since 9/11, waterboarding and the like.”

“That message was very troubling that this kind of training is being done on a group that is listed as terrorist group,” he added.

A few days ago, writing for The New Yorker magazine, Seymour Hersh reported U.S. Joint Special Operations Command trained operatives from terrorist Mujahedin-e-Khalq (MEK, a.k.a. MKO and PMOI), at a secret site in Nevada beginning in 2005.