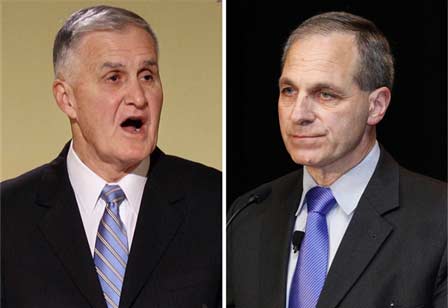 Speaking firms representing ex-FBI Director Louis Freeh and former chairman of the Joint Chiefs of Staff Gen. Hugh Shelton have received federal subpoenas as part of an expanding investigation into the source of payments to former top government officials who have publicly advocated removing an Iranian dissident group from the State Department list of terrorist groups, three sources familiar with the investigation told NBC News.

The investigation, being conducted by the Treasury Department, is focused on whether the former officials may have received funding, directly or indirectly, from the People's Mujahedin of Iran, or MEK, thereby violating longstanding federal law barring financial dealings with terrorist groups. The sources, all of whom spoke on condition of anonymity, said that speaking fees given to the former officials total hundreds of thousands of dollars.

"This is about finding out where the money is coming from," an Obama administration official familiar with the probe said. "This has been a source of enormous concern for a long time now. You have to ask the question, whether this is a prima facie case of material support for terrorism."

Freeh and Shelton are among 40 former senior U.S. government officials who have participated in a public lobbying campaign – including appearing at overseas conferences and speaking at public rallies – aimed at persuading the U.S. government to remove the MEK from the terror list.

Many of the speakers have received fees of about $30,000 or more per talk and first-class flights to European capitals, according to two sources familiar with the arrangements.

Edward Rendell, a former Pennsylvania governor and ex-Chairman of the Democratic National Committee, whose speaking firm also received a subpoena, has received $160,000 over the past year for appearing at about seven conferences and rallies, including some in Paris, Brussels and Geneva, according to his office. (Rendell is a contributor to MSNBC TV.)

The former officials have said they were told the fees came from wealthy American and foreign supporters of the MEK, not the group itself — and they resent any suggestion they are abetting a terrorist group.

"We're all pretty miffed," Shelton told NBC News. "None of us involved in this would say a good word about anyone suspected of being a terrorist." But Shelton said that he's "pretty passionate" that the MEK represents a legitimate resistance group fighting to overthrow "America's number one enemy" — the Iranian government.

In a statement Friday, Hossein Abedini, a spokesman for the MEK,also denied the group has ever “paid senior former U.S. officials or any other dignitary in the U.S.”

“This is an utter lie and there is not even a scintilla of truth to it,” Abedini said. “The MEK, as the legitimate opposition to the clerical regime, enjoys international recognition in Europe and the U.S. The objective of this failed propaganda is to weaken the widespread public support of the members of Congress, officials and scores of U.S. generals for … revoking of the illegitimate and unjust terror listing of the MEK.”

Shelton said that he was informed by Keppler Speakers, the agency that handles his speaking engagements, that it had been subpoenaed for records of talks he has given over the past year at conferences and rallies sponsored by the MEK. He said Freeh told him that Greater Talent Network, the firm that handles the former FBI director's speaking engagements, also received a subpoena. Freeh did not respond to requests for comment. (A Keppler executive also did not respond. Reached by phone, Tom Marcosson, an executive vice president of Greater Talent, declined to comment.)

John Sullivan, a spokesman for the Treasury Department, said the department does not comment on "potential" investigations. But he added in an email: "The MEK is a designated terrorist group, therefore U.S. persons are generally prohibited from engaging in transactions with or providing services to this group. The Treasury Department takes sanctions enforcement seriously and routinely investigates potential violations of sanctions law."

It is unclear how far Treasury Department officials intend to push the probe — or why they chose to launch it now, more than a year after the lobbying campaign began. But NBC News has obtained one possible clue: A small Pennsylvania-based speakers firm called Speakers Access wrote an email in September inviting a Washington based national security expert to speak at a conference in Geneva, Switzerland "on behalf of our client, National Council of Resistance of Iran, Foreign Affairs Committee." The National Council of Resistance is considered by the Treasury Department to be one of the "aliases" of the MEK and is itself designated as a terror group.

The email was later turned over to the FBI and other U.S. officials. The Speakers Access executive who wrote the email, who asked not to be identified, said the email was a "mistake" and that the client was actually another organization — "the Committee for Human Rights in Iran," which is not on the terror list but which has the same contact in Paris as the National Council of Resistance of Iran.

The executive said Speakers Access has since ceased any dealings with either group and turned over all its records on the matter after receiving a Treasury Department subpoena months ago.

The investigation comes at a time of intense internal debate about the MEK, in part spurred by assertions it could prove a useful ally in pressuring the Iranian government to suspend its nuclear program. NBC News reported recently that MEK operatives, trained by the Israeli Mossad, are believed by some U.S. intelligence officials to have been involved in the assassination of Iranian nuclear scientists — a report that the group has denied as "absolutely false."