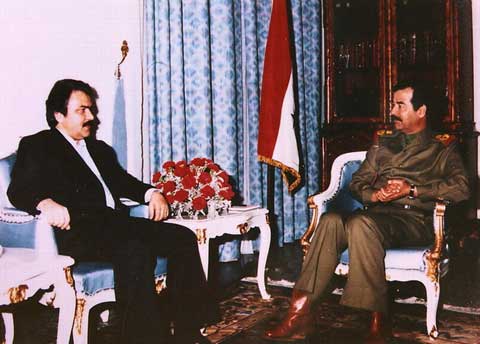 The National Liberation Army of Iran (NLA) is a label invented by the Mojahedin-e Khalq Organization (MeK) and took by some individuals to describe the so-called Military Wing of this group. However, those who are familiar with the MeK know the wrongness of this designation. That is because members of this terrorist cult along with its leaders are either actual or potential military forces.

The NLA was established in 1987 during Saddam’s regime. Formed by a few thousand members of the MeK, this militant entity was equipped by Saddam with a variety of light and heavy weapons including various models of tanks, cannons, helicopters, and fifteen military camps in different parts of Iraq.

Carrying out terrorist acts in the border areas of Iran, numerous military attacks on Iranian territory during the Iraq-Iran war, and cooperating with Saddam's regime in the widespread repression of Iraqi Kurds and Turkmen in the north and Shiites in the south of Iraq after the Persian Gulf War are among the actions of the MeK’s army which took place in cooperation with the dictator of Iraq. Scattered bombings in various parts of Iran during the 1990s, which killed dozens of innocent Iranian citizens, were also part of the terrorist activities of the Liberation Army.

After the MeK's forcible disarmament in 2003, the Liberation Army was disintegrated. Taking advantage of this forced event, the group introduced itself as an opposition group and political opponent of Iran. However, this show was oriented to foreigners to disguise the group’s terrorist nature and did not pursue any internal goals.

During all these years, the MeK tried to masquerade itself as a democratic political group to international public opinion and foreign political officials. Hypocritically, they behave completely otherwise when interacting inside the country. This paradox is highly visible in the group leader’s message on June 20, 2021, and the subsequent developments.

Eighteen years after forcible disarmament of the group and the disintegration of the national liberation army, in a hateful message on June 20, Rajavi, leader of the group, announced the formation of the new militia of the liberation army entitled Fifth Round of the Liberation Army’s Founders. Afterward, the official Persian website of the Mujahedin-e Khalq Organization distributed tens of images and recorded videos of armed men claiming that they are citizens who have joined the Fifth Round of the Liberation Army’s Founders as a response to Rajavi’s call.

The question that the MeK leader should answer is that why the videos of the people with guns in hand using violent literature are not released on the group’s English websites so that their non-Persian supporters can see them too? Why did the MeK, in its annual gathering held in Tirana this year, only show their international guests the images of unarmed members of the Fifth Round of the Liberation Army’s Founders and no the armed ones? Isn’t this so deceitful, hateful, and violent that the Mojahedin has no inclination to let the world see the reality and its true nature?

The Iranian people know the Mojahedin-e Khalq and its history very well and this group should not be mistaken for a democratic political group. There are foreign figures who, due to political reasons, do not want to face the truth. We suggest that they get to know the nature of this cult. The MeK had been a militia and now almost after two decades, they are reviving their militia under different titles.

During the activity of MeK’s Liberation Army, the Iraqi dictator Saddam, in flagrant disregard of international law, was their sole supporter. Now that Saddam is gone, are the Mojahedin-e Khalq supporters seeking to assume the role of the former Iraqi dictator?