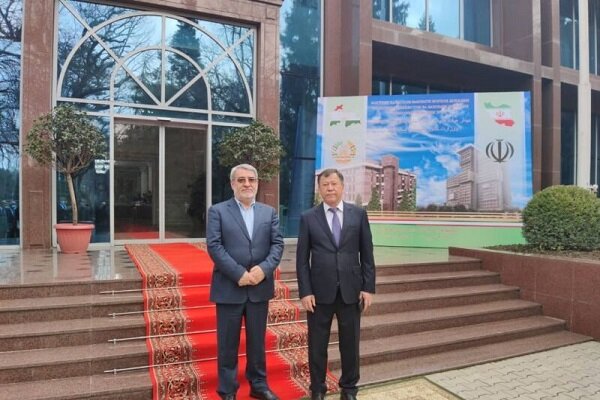 The interior ministers of Islamic Republic of Iran and Tajikistan stressed cooperation in the fight against terrorism, organized crime, drug trafficking and cybercrime.

In the course of his visit to Tajikistan, Iranian Interior Minister met and held talks with Tajik Minister of Internal Affairs Ramazon Rahimov on Tue. to discuss the relevant issues.

While reviewing the recent developments in the region, Iranian interior minister said that extremism, terrorism, human and drug trafficking and insecurity are mainly caused by countries outside the West Asian region.

Elsewhere in his remarks, Rahmani Fazli pointed to the many political, social, cultural, historical and linguistic commonalities between Iran and Tajikistan and added, " The two countries have much in common and we seek peace, stability, justice and security in the region and in all countries.”

Tajik Minister of Internal Affairs, for his part, said, “Given the regional developments and history of relations, as well as existence of manifestations of terrorism and extremism, especially spread of terrorist groups in the region, experience has shown that fight against terrorism, organized crime and drug trafficking and cybercrime is not possible without the cooperation of other countries.”

In this bilateral talks, the two sides emphasized on implementation of agreement on security and law enforcement cooperation between the two countries, cooperation and exchange of information and experience in combating transnational organized crime, terrorism and extremism, combating production of narcotics, psychotropic substances, etc.