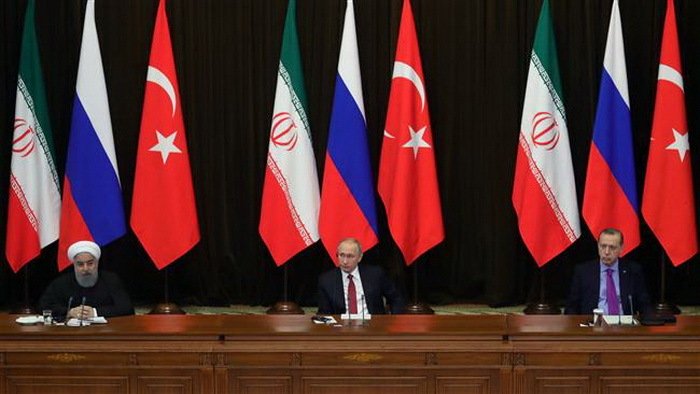 Moscow, Tehran and Ankara seen eye to eye on the fight against terrorism and the need to preserve Syria’s territorial integrity, Russian Foreign Minister Sergey Lavrov said, addressing the Federation Council (upper house of parliament) on Friday.
"As the president [of Russia Vladimir Putin] has stated many times, our goals and interests do not fully coincide, but though our countries have different approaches to various aspects of the Syria issue, we stand together when it comes to the need to defeat terrorism, preserve Syria’s territorial integrity and harmonize relations between all of its ethnic and religious groups," the Russian top diplomat noted.
According to Lavrov, the trilateral group consisting of Russia, Iran and Turkey has been successfully realizing the opportunities that each of the countries has. "These common interests ensure consistent and effective activities on the Astana platform," he added.
The Russian foreign minister refrained from drawing conclusions as to "whether it is necessary to set up a permanent trilateral group, which would have bureaucratized staff."
"I believe, timing is everything," he said. "But in general, current global issues do not require frozen bureaucratized institutions, while there is a need for flexible coalitions that could make it possible to offer effective and timely responses to today’s challenges," Lavrov said.