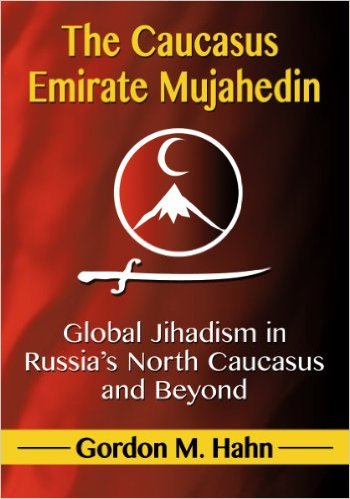 Research on the insurgency and the appearance of local jihadist groups within the North Caucasus after the dissolution of the Soviet Union has been dominated by studies of the uneasy history of Islam under Russian rule, the oppressive post-colonial political rhetoric in handling insurgencies, Chechen wars in the 1990s, and the Russian militaristic counterterrorism approach.

Many studies are devoted to Islamic revival, the spread of radical Islam, Russian war crimes, and human rights violations in Chechnya. Mainly, previous studies failed to track down the evolution of the North Caucasus jihadist insurgency due to their narrow focus. A holistic picture demands a multifaceted approach, and in this regard this book provides an alternative view and comprehensive analysis of the situation. The book by Gordon M. Hahn is an attempt to present the modern development of jihadist groups in the North Caucasus as an integral part of the global jihadist phenomenon.

emirateChapter 1 of this book provides a critical overview of the structuralist approach to the upsurge of jihadism and its theoretical limitations. In particular, the author argues that local socio-political and economic factors such as poverty, unemployment, rigid political order, cannot provide a clear picture on either the upsurge of local or global jihadism. The widely practiced deep focus on these factors leads, at least, to oversimplification of the situation. Therefore, when doing research, it is important to refer to the models of political revolutions and regime transformations with unique compilations of relevant economic, political, cultural, ideological and other determinants. According to the author, the revolutionary situation within the Islamic states leads to a gradual transformation of nationalistic movements into jihadist local branches connected to outside counterparts (Al-Qaeda, etc.). This dramatically changes the nature of local Islamic groups and opens up new opportunities for them. Being a part of a global revolutionary movement, local movements get access to a so-called jihadist collective experience that embraces ideological, organizational, and structural facets, including theo-ideology, charismatic authority, effective guidance (methodology and cadres), and an organizational pattern. Applying these theoretical models to the North Caucasus issue, this book indicates that disregarding crucial factors - ideology, political contingency and operationalizing factors, have to be accounted and analyzed.

Chapter 2 of this book examines the impact of Al-Qaeda foreign fighters, who moved to the North Caucasus in the 1990s and participated in Chechen wars, on the Chechen insurgency. Through a detailed and well documented history of the connections between Al-Qaeda and the Chechen rebels, the author underlines that the main purpose of Al-Qaeda was to spread its influence over these new territories and develop jihadism. The Chechen Republic of Ichkeriya (ChRI) became Al-Qaeda’s partner, spreading its jihadi ideology and fighting strategies within the region. The chapter concludes that this close connection and the infiltration of foreign fighters altered the nature of the Chechen national separatist movement, replacing its nationalistic and secular agenda with a jihadist one.

Chapters 3 – 5 scrutinize the Caucasus Emirate, which can be considered a successor of the ChRI, and its organizational hierarchy, cadres, ideological foundation, conducted operations, and jihadist strategies in light of its connection with Al-Qaeda and its integration with the global jihadi movement from October 2007 to 2011. The book stresses many Muslims from the North Caucasus received religious education abroad after the fall of the USSR, which accelerated and facilitated the adaptation of the jihadist ideology. In particular, Astemirov, Buryatskii, and Vagabov’s activities had the most profound impact in this regard.

Chapters 6-9 reveal the logic of the CE’s development in other Muslim areas of the Russian Federation such as Dagestan, Ingushetia, Kabardino- Balkariya, Tatarstan and Bashkortostan. To be accustomed to the jihadist ideology, this organization announced global goals, declaring war against Western civilization. The CE’s ideological metamorphosis resulted in significant alterations in tactical approach, which included shifting to suicide bombing, targeting civilians, and even the usage of WMD. The growing role of this organization in global terrorist operations, especially in Europe, which has a big immigrant community from the North Caucasus, is underlined in chapter 10 of this book. Thus, the chapters emphasize that this organization as a part of the global jihadist movement became extremely dangerous not only for the national security of the Russian Federation, but for the stability of the entire world community. Chapter 11 serves as a summary for the author’s pivotal conclusions about the nature of the North Caucasus movement and its evolution.

This book is very informative, detailed, and well structured, and undoubtedly provides an essential contribution to the field. Its critical engagement with the structuralist approach and acquaintance with the different trends of academic research make this book an interesting read for scholars, professionals, policy makers, students, as well as concerned individuals. Nonetheless, for a better understanding of the presented ideas, it is important to read Gordon M. Hahn’s previous book “Russia's Islamic Threat”, 2007.