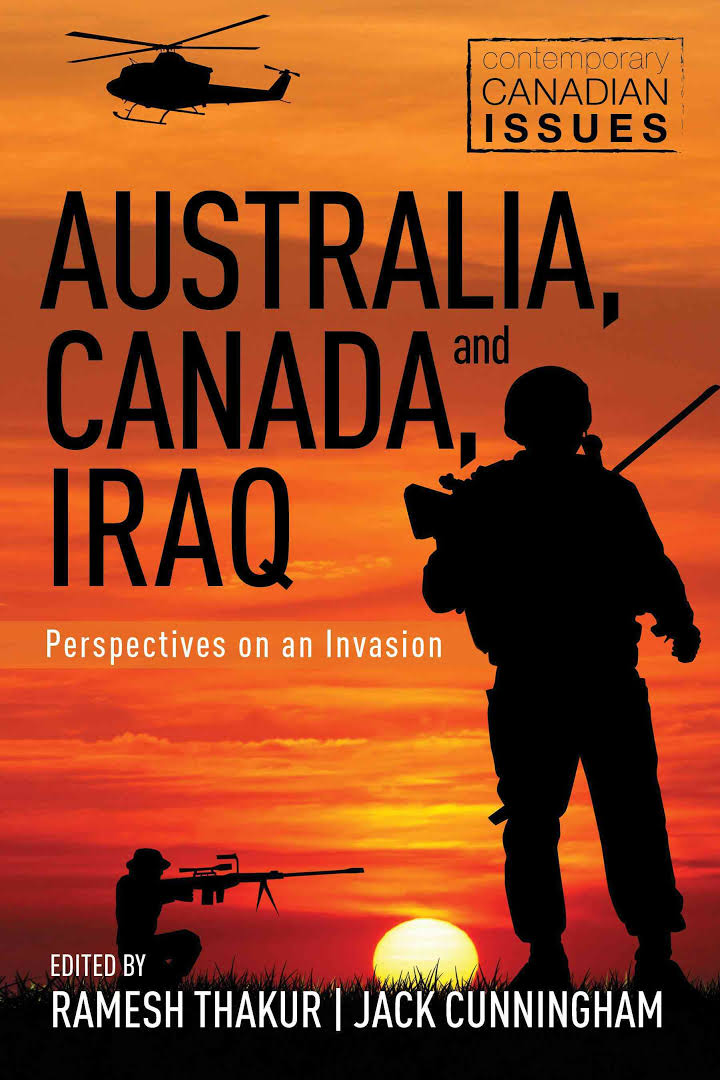 Australia, Canada and Iraq: Perspectives on an Invasion is a series of essays that examines the 2001 Invasion of Iraq by the United States and its allies, why Australia joined the Coalition and why Canada did not. The Editors are Ramesh Thakur and Jack Cunningham two noted academics, who both address the topic with great credibility. Given the authors’ backgrounds it is not surprising the book is critical of the Bush administration and its Iraq policy. Thakur is a former United Nations Assistant Secretary-General and Responsibility to Protect Commissioner. He is now the Director of the Centre for Nuclear Non-Proliferation and Disarmament in the Crawford School at Australian National University. Jack Cunningham is the program coordinator of the Bill Graham Centre for Contemporary International History at the University of Toronto, rounding out the Canadian perspective.
The bulk of the chapters presented are re-worked conference papers presented at the 2013 Canberra conference panel entitled “Parliamentary Democracies at War”. The exceptions include chapters by Former Australian Prime Minister John Howard and Former Canadian Prime Minister Jean Chrétien. These are reprints of addresses that they delivered in Sydney at the Lowy Institute, and at the Graham Centre in Toronto.
John Howard defends his decision to send Australian forces to participate in the Invasion of Iraq while Jean Chrétien explains his reason not to join the 2003 Coalition. Howard described his position within the context of the September 11, 2001 attacks and the vulnerability of democracies to terrorist attack. Howard concedes errors on the part of the Western intelligence community on weapons of mass destruction (WMDs), and the failure to consider and plan for the aftermath of the invasion. Chrétien stresses that the evidence of WMDs was completely inadequate and his government reacted adversely to the policy of regime change without UN approval. In the end, the Chretien government refused to participate in the Invasion of Iraq because the United States government decided to go in without UN approval, and it seems, scuttled Canadian diplomatic efforts to bring about consensus on the UN Security Council in support of the invasion. Together Howard and Chretien make up the more useful and interesting chapters of the entire volume.
Several of the chapters also examine the United States’ invasion. Thakur writes a stinging indictment of the Bush administration and in what is a direct criticism of the regime change policy, the invasion and the aftermath, blaming it for a rise in Jihadism.  Roger Coates’ paper is highly critical of what he calls “exceptionalism” and “unilateralism” associated with the George W. Bush administration. Charles Sampford’s analysis is similar in that Australia and Canada have both historically sought to maintain independence from the United States and Great Britain. Additionally, William Maley writes that given its need for collective security, it would have been odd if Australia had not joined the United States in Iraq. In what is the volume’s most balanced piece, John Blaxland concludes that had the 2000 presidential election ended in Democratic victory, President Al Gore would have acted against Iraq just as George W. Bush did. Kim Nossal contrasts the Mulroney decision to not join the United States in Strategic Defense Initiative or Star Wars during the Regan administration, to the Chretien government’s refusal to participate in Iraq.
The greatest critique of the Australia, Canada, Iraq: Perspectives on an Invasion is its left of centre attack on the George W. Bush regime and its Iraq policy. The essays with few exceptions give little strategic context about the failures of the Clinton administration’s foreign policy that led to the second Bush Presidency going into Iraq. Nor does the volume give strategic context to the Obama administration’s failure to check the Islamic State in its early stages and the disastrous Iraq withdrawal, instead leaving everything at the feet of George W. Bush.  Saddam Hussein is almost depicted as an innocent target of American Conservatives and the United States’ thirst for oil. Canada’s former Prime Minister Jean Chretien is depicted in a very positive light, not surprisingly, given the bulk of the writers’ partisan inclinations with no mention of the fact that he sent Canadian troops to Afghanistan with light jeeps and green uniforms after the so-called “decade of darkness”, or that the ‘foreign policy’ genius was removed from the political scene in scandal and by his own party.
In conclusion, the reader will find the essays disjointed owing to the fact that they come from a series of conference papers, and at times it can even be a bit distracting.  (For those interested, there are a series of articles included in the peer-reviewed security literature where more balanced reads are outlined, rather than this disappointing volume.) For those that believe George W. Bush was the great Satan, and that Conservatives are the bane of their existence, this is the volume to read on Iraq. For those who want to read a balanced study, they might want to go elsewhere after reading Howard, Chretien, English and Nossal on Iraq