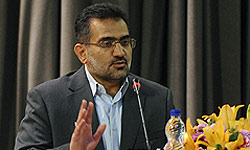 "We believe that security in the region will not be possible with the presence of outsiders," Hosseini said on the sidelines of the International Conference on the Global Fight against Terrorism.

"The authorities of the regional countries themselves have to take serious measures in this regard," he added.

"The presence of NATO or the other forces of the Western countries in the region will be tantamount to insecurity and an increase - rather than a decrease - in (regional) problems," Hosseini further said.

Referring to a tripartite meeting between officials from Iran, Pakistan, and Afghanistan, the Iranian minister said that neighboring countries need to be in constant contact with each other, adding that such coordination can certainly contribute to peace and security in the region

He also said that a decision was made during the meeting to establish committees to follow up on mutual economic, security, and political issues among the three countries.

The two-day anti-terror conference in Tehran started work on Saturday. The event has brought together senior officials from at least 60 countries, and representatives from several international organizations, including the UN.

The high-profile conference, held with the slogan of a "World Without Terrorism", is aimed at increasing international convergence and coordination in fighting terrorism.