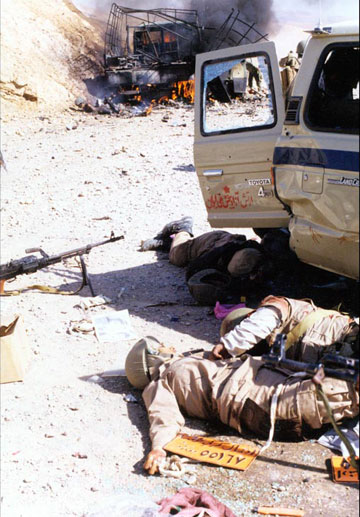 Mojahedin-e Khalq strategy of armed struggle that constitutes its organizational infrastructure from its very formation has now confronted the organization with a new challenge in spite of its widespread propaganda to convince the West it has made revisions. Although the challenge has failed to break the deadlock over Mojahedin’s proceeding with its revolutionary diplomacy in the outside world, the strategy is the main factor that stabilizes the group’s internal relations especially within Camp Ashraf. That is to say, for the outsiders the organization displays the dual policy of abandoning militarism and armed activities; for the insiders it is a strategically unquestionable principle.

That is a contradiction pervading MKO and, of course, the group has not resolved to convince the Westerners to have adopted a different attitude. It seems that MKO gets much advantage out of an equivocal attitude. In many occasions, MKO has admitted the necessity of armed struggle as an ideological necessity that constitutes the violent ontology of MKO. Definitely stated in the State Department’s report presented to Congress on the People's Mojahedin of Iran in 1994, MKO developed an eclectic ideological blend of Islam and Marxism that dictated both a war of armed struggle and a war of propaganda to achieve political power.

They [Mojahedin] established an organization dedicated to armed struggle. As they explained in a 1974 newspaper article, "We had to ask ourselves the question, "What is to be done?" Our answer was straightforward: 'Armed Struggle.,"(1) Commitment to this strategic principle has defined the history of the Mojahedin, from the group’s formal establishment in 1965 until today.... The MKO's embrace of armed struggle flows from the group's ideology. Its conceptual framework was painstakingly developed through years of study and discourse and aggressively disseminated throughout Tehran.

Being so fervently devoted to a violent strategy, MKO should undergo a complete ideological cleansing before renunciation of terrorism and militarism. But first it has to be investigated that is it possible by any means to change an ideology that institutes infrastructure of an organization?

During the past two decades, majority of MKO’s propaganda and published documents strongly advocate the strategic importance of the adopted tactic of armed warfare following the organization’s first mass movement on 20 June in 1981; the turning point that was broadly being propagated at the time and which was supposed to speed up the inevitable collapse of the regime. In his first series of speeches delivered on the first anniversary of the phase Khordad 30th (20 June 1981), Massoud Rajavi talked about the influential role of MKO’s ideology on the event:

A one-year review of implacable struggle indicates that it is a widespread, organized struggle and resistance matchless in Iranian history. It is not a merely review of political, military, strategic and tactical issues. All of them together, as different organs of body, constitute a cohesive essence that is Mojahedin’s ideology; they all remarkably signify this truth.*

All the nonsense woven against the armed struggle during this one year is loathsome and even ludicrous to listen to for those who are in close contact with reality.

In fact, the telling reality Rajavi points out is that armed struggle is the spirit of the organization without which it cannot survive:

In essence, we owe our existence and survival before anything to the widespread armed combat of the Iranian Mojahedin-e Khalq Organization.

There are much more evidences found in MKO’s ideological sources that implicitly and explicitly denounce abandoning the strategy of armed warfare adopted by Mojahedin and consider any made criticism and disapproval as definitely illegitimate. Those who are familiar with the group’s dual nature consider MKO’s claimed renunciation of militarism nothing beyond a tactic of duplicity.

Since MKO’s resort to armed combat and militarism is an internalized ideological principle, its renunciation also needs a similar process of ideological revision. If MKO is standing resolute to abandon terrorism as it claims, at least a review of its previously adopted resolutions will imply the earnestness of its decision. Renunciation of terrorism and militarism, although MKO has refrained to denounce publicly, first needs a through ideological polish, something MKO has dodged to go through at least up to now. MKO should explain how commitment to an ideological necessity can possibly be deserted while the ideology itself remains intact.