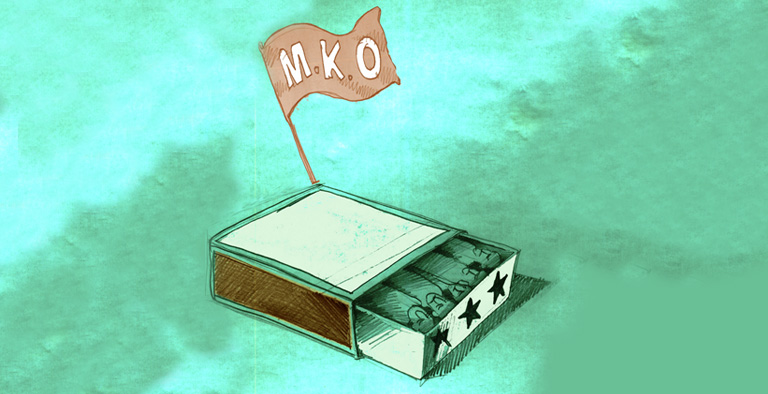 Maryam Rajavi’s arrest on 17 June 2003 and its aftermath gave the states and the public opinion the opportunity to see behind the pseudo-democratic face of the Mojahedin-e Khalq (MeK). Accused of terrorist activities, association with a terrorist organization and financing terrorist operations, the French Police raided the office of MeK at Auvers-sur-Oise and arrested 164 suspected Mojahedin cadres as well as Maryam Rajavi. Immediately after the arrests, a number of the group’s insiders immolated themselves in public in a series of premeditated missions as leverages of pressure to buy Maryam Rajavi’s freedom. The human tragedy ended with two deaths; according to the group’s own reports, two women, Sediqeh Mojaveri and Neda Hassani died because of the self-immolation injuries. One more was paralyzed forever.

What comes bellow contains an article written by the former member of the MeK, Javad Firoozmandi about the events of June 17, 2003 and its aftermath.

The French Police arrested MEK’s leader, Maryam Rajavi, along with 165 of the group’s senior members and confiscated $1.3 million in cash out of a safe in Maryam Rajavi’s personal bedroom. Some speculations estimate the confiscated money to be as much as $8 million.

Computers, written documents and the group’s other electronic devices including some spyware were also seized by the Police.

The French ministry of interior explained the operation in an announcement: “The Police raid was carried out due to criminal connections preparing for terrorist operations and material support for terrorist activities (by the MEK). The group’s offices in Paris, its operational, organizational and logistic bases are meant to collect suspicious money.”

Money laundering and planning for assassination of MEK’s defected members in Europe were among main accusations the group was facing. Le figaro wrote in an article at the time that the MEK was pursuing a plan to take out 25 defected members. The article also added that there are new documents indicating MEK was planning to attack 13 Iranian embassies in European countries.

The New York times also reported at the time that the French government had aimed to prevent the relocation of MEK’s operational-political headquarters from Iraq to France by taking Maryam Rajavi into custody.

The then director of French General Directorate for Internal Security referred to Rajavi’s arrest by saying: “French intelligence agencies had noticed numerous MEK members entering French soil since fall 2002. The MEK had rented a color factory in Saint-Quentin to set up a TV studio and establish a communications center, which indicated the beginning of a new aspect of MEK’s activities in France.

French minister of foreign affairs at that time, Dominique de Villepin, had also said that the MEK was planning terrorist operations from inside French soil. He referred to detention of MEK’s leader as a judicial decision not a political one and included: “The MEK is a terrorist group which has taken responsibility for dozens of operations in Iran.”

Jean-Pierre Raffarin, then French PM, referred to the decision as an act of defending the national interests in an interview with La Monde and said: MEK terrorist group’s places have been raided in a turbulent period of time. He continued this raid would stop the entrance and relocation of terrorists in French soil.

Mr. Raffarin had included in the interview that the EU has listed the MEK as a terrorist organization and the group has claimed responsibility for more than 150 attacks inside Iran.

According to the French PM, a counter-terrorism judge in France had ordered the attack. French authorities had also rejected the reports indicating Iran had demanded to arrest MEK members.

The MEK reacted quickly. Not only they mobilized their members and supporters in France and the Europe to set themselves on fire, but also they had planned to burn down the whole Ashraf camp in Iraq while its residents were still inside.

According to an order issued by Massoud Rajavi and the headquarters of Freedom Army, MEK members in France and Europe were required to set themselves on fire. The MEK aimed to pressure the French government and force them to release Maryam Rajavi.

Subsequently, on June 17, 2003, dozens of MEK members set themselves on fire in front of the astonished eyes of people in France, Switzerland, Italy and Canada.

The MEK had also prepared to record videos and take pictures of these self-immolation operations.

The show was not limited to European countries. In Ashraf camp, MEK members were standing in line to set fire to themselves.

Finally, after 21 MEK members participated in this self-immolation operation in a 4-day period since June 17, MEK quoted the French ministry of interior as saying Maryam Rajavi was not going to be returned to Iran, as the Iranian government had basically not made such a request.

MEK’s Junne 17,2003 judicial case was dismissed on September 16, 2014 by a French judge following the delisting of the group in Europe.

However, this incident showed that the Mojahedin Khalq Organization and the council under the supervision of Massoud and Maryam Rajavi, contrary to their claims of abandoning terrorist acts, are still willing to practice sectarianism and terrorism at any time due to their sectarian and terrorist nature.