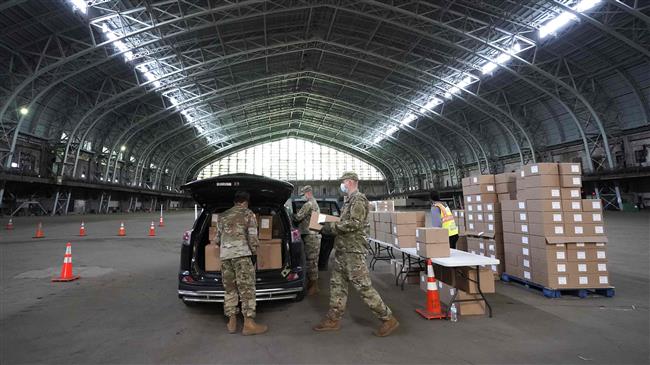 Since nearly three and a half months now, the United States, like many other countries in the world, has been affected by Coronavirus. The first case of 2019 Novel Coronavirus (COVID-19) in the United States was reported in Washington State on January 21, about three weeks before President Trump presented the fiscal 2021 budget to the congress, calling for cuts to social safety net programs.
By comparing Coronavirus cases and deaths in the U.S. (As of April 20, the U.S. has more than 760,000 confirmed cases and 40,565 deaths) and other countries in the world, one could see that nearly one third of the COVID-19 confirmed cases and one-fifth of the dead are U.S. citizens. This is while the U.S. president had initially downplayed the Coronavirus, attempting to keep public panic at bay.
The U.S. has now more confirmed Coronavirus cases than anywhere else in the world, while the number of cases in Iraq and Afghanistan, the two countries where the United States has had a military presence since 2001 under pretext of the War on Terror, are respectively 1539 and 996 people (As of April 20).
Although the United States is much stronger in terms of wealth and infrastructure than Iraq and Afghanistan, e.g., the U.S. budget for the Fiscal Year 2021 is 35 times more than Iraq’s, but, regrettably, it has been much weaker than those countries in responding to the pandemic and its situation is much more worrying.
According to Dr. Brian Monahan, the attending physician of U.S Congress and the U.S Supreme Court, 70 million to 150 million people in the U.S. will become infected with COVID-19. That estimate, which is in line with other projections from health experts, underscores the potential seriousness of this outbreak because it has become clear that the U.S. infrastructure is not ready to face such a threat to the health of its citizens.
The Tragedy is that the Health and Human Services’ share of the Trump's proposed budget for FY 2021 is estimated at 96 billion dollars, which includes a nearly ten percent cut, almost 100 million dollars.
On the other hand, estimated U.S. military spending for the same period of time is $934 billion, about 10 times of Health and Human Services’. This figure is more than the $705 billion outlined by the Department of Defense alone.
In its 2021 budget, the Trump administration announced proposed cuts that would reduce CDC funding by 16 percent and slash $3 billion for global health programs. This issue has not escaped the attention of Trump critics and social activists.
The question is, why does the United States allocate this large amount of budget to its military, especially military operations outside the United States, while it could prevent the formation of a major catastrophe like what we see today in the United States by strengthening the health sector and allocating a significant part of the large military budget to it.
The United States has spent about $ 6.4 trillion since 2001 on the so-called war on terrorism in Afghanistan, Iraq, Syria, Pakistan among others. This is about 1.5 times the country's budget for this year, a significant portion of which comes from citizens' tax revenues.
According to the Costs of War Project, from 2015 to 2017, the United States have conducted military operations in 76 different countries in line with the War on Terror strategy. It has also more than 600 military bases in five continents.
The decisions, behaviors, and military spending of Donald Trump administration are no longer meaningful, even within the framework of the balance of power, and are more like an insatiable thirst for power.
By comparing the U.S. military budget with its most powerful rivals in the world, namely Russia and China, one can find that how the rights of U.S. citizens, who are under pressure to provide their basic needs in the time of Coronavirus, are violated.
According to the British Institute for Strategic Studies, while the Trump administration's military budget in 2019 was $ 684 billion, China with $ 181 billion and Russia with $ 61 billion, were significantly behind the United States. In terms of foreign military presence, Russia has 21 military bases in other countries, while China, has one military base in Djibouti.
The Trump administration, in line with its massive military spending, has set respectively aside $ 1.5 billion and $ 788 million to confront directly with China and Russia in next year's budget. Of course, this will help intensify competition between these countries and lead to a steady increase in military budgets in the coming years.
After halting funding to the World Health Organization, Donald Trump announced that his administration reviews the group’s handling of the Coronavirus, accusing it of bungling the response and failing to communicate the disease’s threat.
Regarding the fact that The U.S. is the main contributor to WHO, at more than $400 million per year, cutting off funds to the group, which has a $4.8 billion annual budget, will be a major blow to the organization as it conducts vaccine trials, distributes test kits and advises governments around the world.
Undoubtedly, the Covid-19 challenge highlighted the leadership failure in some countries, especially in Europe, but what distinguishes the Trump's United States from the other countries and exposes him to criticism more than any other leader is unique features of this country.
The US huge military spending has launched an unequal arms race in the world that could generate a humanitarian catastrophe with a long-term impact on the economy; a catastrophe which will show that prioritizing the basic needs of citizens' lives and better infrastructure is a necessary measure for a country's internal security.