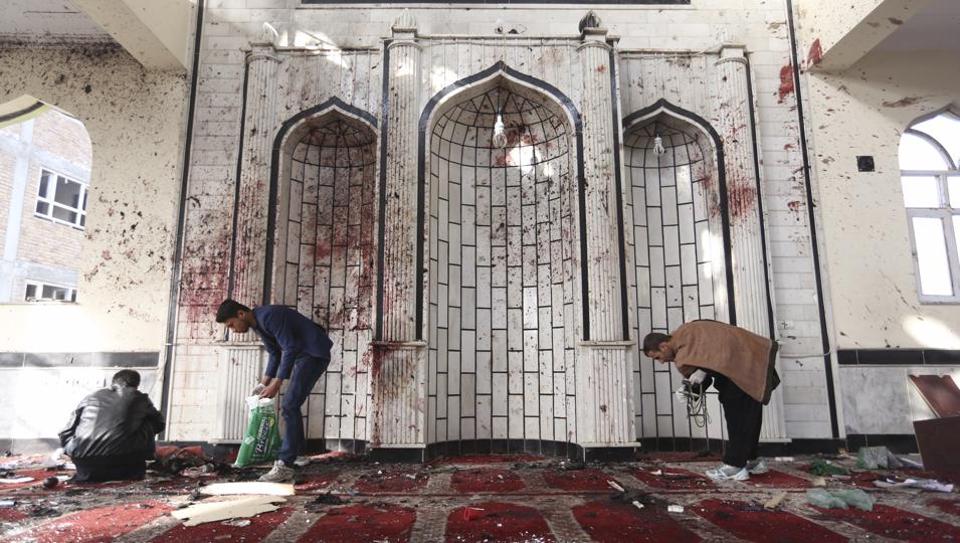 A strong smell of blood and flesh permeated the Imam Zaman mosque in Kabul on Saturday hours after dozens of Shia worshippers were slaughtered by a suicide bomber during evening prayers.

Broken glass and dust covered the red carpet, soaked in the blood of the men, women and children who had been praying on Friday when the attacker blew himself up, causing carnage in the cavernous prayer hall.

At least 56 people were killed and dozens wounded in the assault claimed by the Islamic State group -- one of two deadly mosque attacks on Friday -- capping one of the bloodiest weeks in Afghanistan in recent memory.

“This is absolutely barbarism. What kind of Islam is this? They are attacking worshippers at the time of prayers, even mosques are not safe for us to pray.”

Hours after the suicide bomb the Taliban fired two rockets at the headquarters of NATO’s Resolute Support mission in the heavily fortified diplomatic quarter of Kabul. There were no reports of casualties but the attack underlined the worsening security in the country.

Early Saturday dozens of anxious relatives, some of them crying, stood outside the mosque’s main gate which had been cordoned off by heavily armed police, as they waited for news of the whereabouts of their loved ones.

An eyewitness told AFP that the attacker detonated his explosive device among the worshippers towards the end of the prayer session.

“It was one suicide bomber packed with explosives and hand grenades wrapped around his body,” the man told AFP.

The dead and wounded were taken to hospitals around the Afghan capital but eyewitnesses complained to local media that it had taken emergency services more than an hour to arrive at the scene.

Hundreds of sandals littered the entrance to the mosque, left behind by the worshippers killed and wounded in the latest deadly attack on a Shiite mosque.

A woman wearing a hijab sobbed as she crouched on the ground searching for the shoes of her brother and young nephews who died in the attack.

“I was in the mosque bathroom when I heard a blast. I rushed inside the mosque and saw all the worshippers covered in blood,” Hussain Ali told AFP shortly after the explosion.

“Some of the wounded were fleeing. I tried to stop someone to help me help the wounded but everyone was in a panic. It took ambulances and the police about an hour to reach the area.”

The force of the blast shattered all the windows of the mosque. Its walls and ceiling were covered with dark blood spatters and peppered with shrapnel.

Several men moved around the room picking up dozens of coloured prayer beads and Koran holy books left on the floor.

“What kind of Muslim they are? What is our government doing?” Rasoul, a shopkeeper in the area, told AFP through sobs.

“We are tired of living here, we are not even safe inside the holy sites