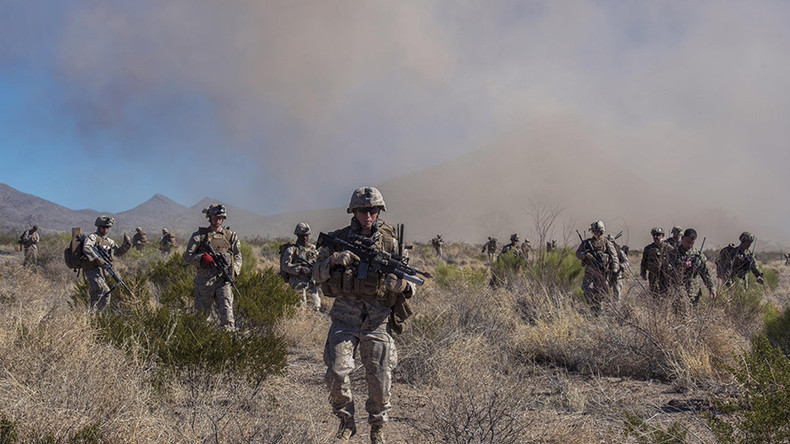 The US’ only answer to terrorism is violence against violence, but that’s like trying to eradicate diseases by killing patients; a more constructive approach is needed, says Jan Oberg, director of the Transnational Foundation for Peace & Future Research.

A report released under the Freedom of Information Act shows the US has been simulating an invasion of West Africa in response to an imaginary terror attack on American soil.

The latest Pentagon project was designed to train those who will manage future American wars. The terror attack scenario was played last year as part of the simulated exercise by students from the US military’s war colleges.

RT:  Do you have any issues with the US simulating a New York terror attack to invade Africa?

Jan Oberg: No. First of all, this is a kind of a war game. … People are thinking about what the future will be like. What is really interesting is that it ends with getting stuck in Africa too, like everywhere else with all these failed wars by the US.

Secondly, it is very interesting that the African experience has to do with the fact that Libya was smashed up, and that is why we have a generation of new terrorism and the training of new terrorists in that part of the world.

Third, it is very indicative and revealing that after 16 years of fighting terrorism – ‘the global war on terror’ – there is not one person in the US, who is obviously beginning to think: “Have we got things wrong the last 16 years?” Because statistics tell you the global terror problem cost 80 times more human lives today than it did in the year 2000. The main creator, today of terrorism, is ‘the war on terror’ – it is not terrorists, but the ‘war on terror’ – that provokes that.

What this wargame illustrates is that the only answer the American military and political people have is tit for tat: violence against violence and this is unending. We’re never going to have solved the problem of terrorism by killing terrorists. It is as stupid as it would be to say: we want to eradicate all the deceases by killing all the patients. This is such a low intellectual level that the world ought to, and Europeans and others, who might be still be able to think constructively - would ask the Americans to think differently about this type of warfare.

RT:  Isn't this a surprisingly specific scenario? Is it a coincidence this simulation comes as US AFRICOM (US Africa Command,) created in 2008, is ramping up operations across the continent?

If you‘re really strong and the only dimension of power that you have is a hammer, all problems in the world will be seen as something that will be solved by means of hammers. In the end, instead of using other tools, you’re ending up smashing one country after the other getting hated. That, to summarize it all, are examples of this game too, of the decreasing, or tendency to fall of the US empire. That is the unfortunate and very dangerous period we have to go through the next five to ten years. Not the US in dissolution, but the US empire must go before it can become a better world.