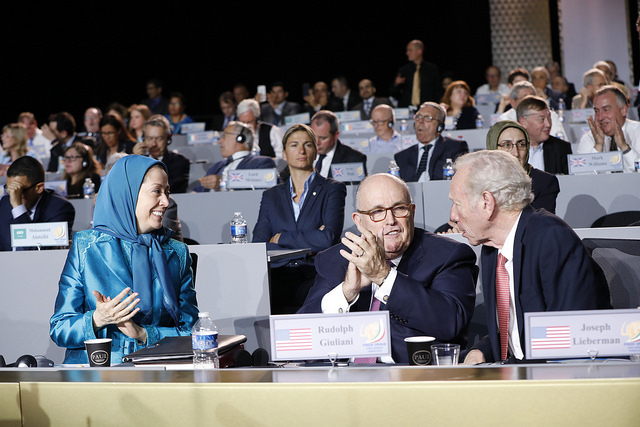 If you want to change a group of terrorists who have killed American overseas into something that appears to be much more benign, all you have to do is pay off the right people in Washington. With enough money, you can even open a nice plush lobbying office on Pennsylvania Avenue in the District of Columbia, not too far from the White House and Capitol Hill.

One-time Secretary of State Hillary Clinton has been rightly blamed for the ill-conceived and badly bungled “regime change” in Libya in 2011 that eventually led to her mishandling of the resulting blowback in Benghazi, but one of her greatest failings just might have involved the piece of paper she signed when she removed the Mujaheddin e Khalq (MEK) group from the State Department list of “designated terrorist organizations” in September 2012.

How is it possible that the bad judgment demonstrated in the Libyan fiasco that created a failed state, a humanitarian disaster, a migrant crisis, armed terrorists and ultimately produced the murder of the U.S. ambassador and three other Americans compare with a signature on a piece of paper?  It is because that signature put in place one of the elements that will most likely in the near future lead to a far more disastrous war for the United States than was Libya. MEK, now labeled the National Council of Resistance of Iran (NCRI), has become a principal voice of the war party that is now seeking to attack Iran, a role similar to that played by Ahmad Chalabi and his Iraqi National Congress in his disseminating of lies in the lead up to the catastrophic invasion of Iraq in 2003.

The tale of the rehabilitation and rise of MEK/NCRI is a subset of the ongoing corruption of America’s political culture, best illustrated by the fact that even national security is now up for sale, enabling a terrorist group to transform itself into a “resistance movement” and eventually be labeled “freedom fighters.”

How did this happen as MEK was on the State Department roster of foreign terrorist organizations since the list was established in 1997?  Its inclusion derived from its having killed six Americans in the 1970s, its participation in the U.S. Embassy hostage-taking and from its record of extreme violence both inside and outside Iran since that time. When I was a CIA trainee our course included a simulation of the horrific attack on U.S. Air Force Officers in Tehran in 1973 that killed two colonels.MEK is widely regarded as a terrorist cult headed by a bizarre husband and wife team Massoud and Maryam Rajavi. Its members are required to be celibate and are subjected to extensive brainwashing, physical torture, severe beatings even unto death, and prolonged solitary confinement if they question the leadership.  One scholar who has studied them describes their beliefs as a “weird combination of Marxism and Islamic fundamentalism.”With the sharp turn of the Trump Administration against Iran, NCRI is now finding an audience , telling the American public that Iran is "cheating" on the nuclear deal.  It also tells us that “Iran’s nuclear weapons program has far from halted” and has claimed to identify four major sites that “with a high degree of certainty” have been involved in various aspects of the allegedly ongoing nuclear weapons project. This has led Jillian Mele of Fox News to declare, falsely, that “It appears [Iran’s nuclear] weapons program is fully operational.”

The CIA has in the past recruited MEK/NCRI agents to enter into Iran and report on nuclear facilities, but Israel’s Mossad is the group’s principal employer. Agents, recruited and trained by Israel, have killed a number of Iranian nuclear scientists and officials.  The group appears to have ample financial resources, places full page ads in major US newspapers, and is also known to pay hefty fees to major political figures who are willing to speak publicly on its behalf.  The group claims to want regime change in Iran to restore democracy to the country, an odd assertion as it itself has no internal democracy and is loathed by nearly all Iranians.

Because MEK/NCRI is a resource being used by Tel Aviv in its clandestine war against Iran, it is perhaps inevitable that many friends of Israel in the United States actively campaigned to have the group removed from the terrorism list so that it could, ironically, have a free hand to continue to terrorize Iran.  Indeed, neocons at their various think tanks and publications as well as the American Israel Public Affairs Committee all recommended delisting the group and continue to support it. Prominent American Jews to include Elie Wiesel and Alan Dershowitz have been advocates for the group in spite of its record of terrorism.

Multi-million dollar contracts with Washington lobbying firms experienced at “working” congress backed up by handsome speaking fees have induced many prominent Americans to join the chorus supporting NCRI. Prior to 2012, speaking fees for the group started at $15,000 and went up from there. Former Pennsylvania governor Ed Rendell reported more than $150,000 in honoraria. Rudy Giuliani has been paid generously for years at $20,000 per appearance for brief, twenty-minute speeches. Bear in mind that MEK was a listed terrorist group at the time and accepting money from it to promote its interests should have constituted material support of terrorism.

The group’s well-connected friends have included prominent neocons like John Bolton and ex-CIA Directors James Woolsey, Michael Hayden and Porter Goss as well as former Generals Anthony Zinni, Peter Pace, Wesley Clark, and Hugh Shelton. Traditional conservatives close to the Trump Administration like Newt Gingrich, Fran Townsend and Elaine Chao are also fans of NCRI. Townsend in particular, as a national security specialist, has appeared on television to denounce Iran, calling its actions “acts of war” without indicating that she has received money from an opposition group.

The emergence of NCRI at this time is just another fool’s game with the usual Washington crowd queuing up for a bad cause because they are both lining their pockets and thinking they are helping Israel by punishing Iran.  In any event it is a poor bargain for the rest of us, but that hardly seems to matter anymore.