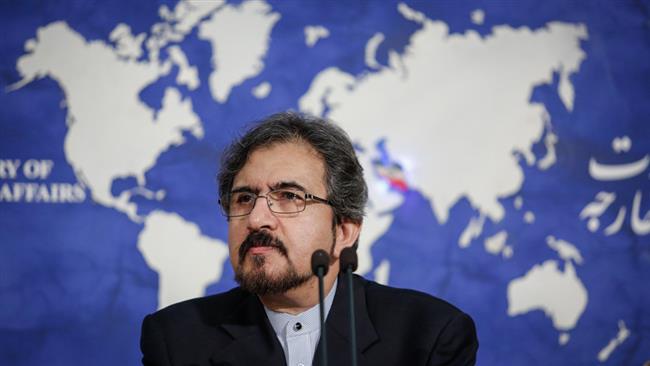 Iran says the Arab League must urge Saudi Arabia to put an end to its killing of civilians in Syria, Iraq, Yemen and Bahrain and supporting terrorist groups founded and nurtured by the Saudi regime itself.

Iranian Foreign Ministry spokesman Bahram Qassemi on Friday expressed astonishment at the "biased and unjust" statement issued at the end of an extraordinary consultative meeting held by the council of Arab League foreign ministers in Cairo on Thursday.

“If this council is honest in its willingness to help promote peaceful coexistence among regional countries and is firmly determined to establish convergence and boost good neighborliness, it is necessary to stop its unconstructive support for Riyadh just for once,” Qassemi said.

He added that "one-sided and bigoted" support of the Arab League leaders and its foreign ministerial council for some members of the body over recent years has failed to help settle crises and misunderstandings among regional countries and the league’s members.

The Iranian spokesperson emphasized that such biased approaches have rather caused more instability, insecurity and chaos across the region, and led to Saudi Arabia's "more blatant and shameful" killing of innocent people in some Arab countries.

He said the Islamic Republic advises the Arab ministerial council to think wisely and understand the reality on the ground.

The continuation of the current trend and supporting Saudi Arabia "can plague these countries themselves with Riyadh’s destabilizing policies in a short time,” Qassemi pointed out.

He added that those injured in a deadly crush during last year’s Hajj rituals in Mina, near the holy city of Mecca, and the families of the victims expect the Saudi government to be held accountable for the tragedy and reveal the facts about last year's crush and other deadly incidents taking place every year during the Hajj rituals.

Qassemi made the comments in reaction to the Arab foreign ministers’ condemnation of the recent statements by Leader of the Islamic Revolution Ayatollah Seyyed Ali Khamenei against Saudi Arabia.

The picture shows a meeting of the Arab League foreign ministers at the body’s headquarters in the Egyptian capital Cairo on September 8, 2016. ©AFP

In his message to Hajj pilgrims on September 5, the Leader said, “Those who have reduced the Hajj to a mere pilgrimage-tourism trip and have hidden their enmity and grudge against the faithful and the revolutionary nation of Iran under the title of the "politicization of the Hajj" are puny and belittled devils, who shudder as soon as the ambitions of the Great Satan, America, are put in jeopardy.”

The Leader urged the Muslim world to know the Saudi rulers and truly realize the reality of their unfaithful and materialistic nature, saying they “must think of a fundamental solution for the management of the Two Holy Mosques and the issue of Hajj.”