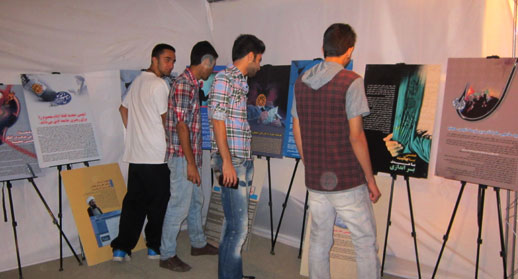 The exhibition included some different parts with details on: Origins of Hojjatieh Society, deviations of Hojjatieh leaders since the establishment of their Society, wide connections of Hojjatieh with Savak (Shah regime’s intelligence service), financial documents of the Society, the methods they use to promote their ideology in different environments and their recruitment techniques.

A Habilian expert gave a speech on Hajjatieh’s deviant believes among a number of young visitors on the third day of the exhibition.

He said: “Hojjatieh members believe before the arrival of the 12th Imam, no one is entitled to establish an Islamic government and it would be in vain even if they do. And this is why they had no big problems with the Shah regime; meaning it is no different to them who the ruler is and what the government may be. The only thing that matters is for us to protect our own faith and prepare ourselves to join Imam when he comes back and then try to establish the global justice.”

He included: “When you ask them what the characteristics of a person really waiting for Imam’s comeback are they would answer: Just pray for his comeback! Do some charity works for his health! … . Aren’t these really a part of the tasks that believers have been advised to do during the era of Imam’s absence?! But surely they are not enough. “

He also referred to the time when Hojjatieh members had doubled their efforts to hold the ‘Nime Sha’aban’ (anniversary of the 12th Imam’s birthday) celebrations gloriously despite a ban from Imam Khomeini on public celebrations for that year (1979) as an objection to the ruling system. They used to justify their act by saying: “Shah is a shia too!” It is so painful to see such a deviant group which is apparently similar to the revolutionary movement led by Imam Khomeini is recruiting young active members and turning them into passive elements who are busy with low priority and secondary subjects. 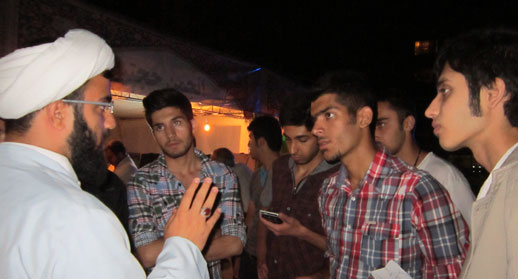 Habilian expert included: “Maybe there are people among their wise who don’t believe in doing more sins to facilitate Imam’s comeback. But sitting aside silently and just wait for the Imam to come back and fix everything himself is surely a contribution to spread of the corruption and injustice. The oppressors and corrupt men also pursue likewise deviant believes such as prohibition of political and social activities during the era of Imam’s absence for the believers of the 12th Imam. “

And in the last part of his speech he said: “Despite the factitious deactivation of Hojjatieh Society in 1984, they are still active and recruiting members and trying to make Shias and Sunnis enemies with each other in the name of confronting Wahabiat. Hojjatieh Society is like a doctor who is facing a patient with some wounds and a failing heart, but instead of taking care of the patient’s heart, he tries to heal his superficial wounds! They have always had problems in recognizing the main enemy. In the beginning years of revolution they had focused all their activities on highlighting the danger of Marxism instead of confronting the threats coming from the U.S. despite Imam Khomeini had clearly called the USA the ‘Great Satan’. And right now they falsely claim the main threat is coming from our Sunni brothers and try to show that threat even bigger than the international Zionism. They even opposed the Islamic republic’s support for Gaza and Palestine and said: It is not allowed to help Palestinians since they are Sunnis!! And this is exactly where they join the Wahhabi leaders of Saudi Arabia!”

Some related videos were played in another part of exhibition which was welcomed by the exhibitors.