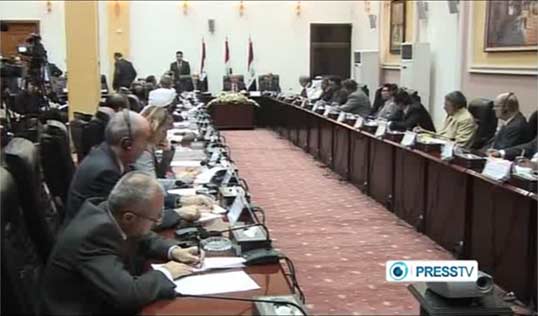 In a meeting with the representatives of eight foreign counties the Iraqi national Security Advisor stated that the MKO members have never shown any cooperation with the Iraqi government and Iraqi has accepted the six months period in response to request of the UN.

The meeting which was organized and headed by the Iraqi national security advisor included the United States, UK, EU, China, Russia, Canada, Australia and the representative of the Arab League.

During the meeting the Iraqi national security advisor stated that the Iraqi government will deal with the MKO members as an Anti-Iraqi Sovereignty group.

On the other hand the Iraqi national security advisor stressed that Many MKO members are on the Iraqi wanted list for committing crimes against humanity in the country during the 1991 popular uprising, the list containing 38 MKO members including Masoud Rajavi and Mariam Rajavi.

He said that the Iraqi justice system will do its duty in bringing the wanted criminals to justice to be prosecuted according to the Iraqi law.

The representative of the UN’s Secretary General Mr. Martin Coupler stated that the time is up and urged the MKO members to pack up their properties and be prepared for the next move.

He further said that the United Nation is directly involved in the issue and called for finding a peaceful solution for the MKO issue in Iraq.

The MKO is listed as a terrorist organization by much of the international community, and is responsible for numerous terrorist acts against both Iranians and Iraqis. The group is especially notorious in Iran for siding with former Iraqi dictator Saddam Hussein during the 1980-1988 Iran-Iraq war.