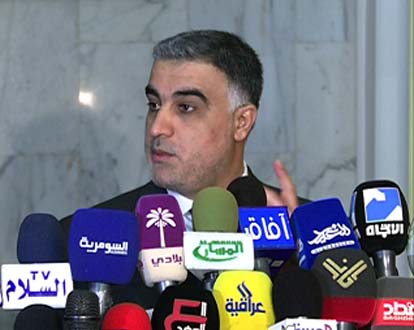 Hassan Al-Shammari expressed his wonder over recent remarks of dismissed Iraqi Deputy Prime Minister Saleh al-Mutlaq regarding the Iran’s involvement in the expulsion of MKO members from Iraq and stressed that this measure has been taken following the Memorandum of Understanding signed between Iraq and United Nations, Habilian reported.

According to the report, three days ago Saleh al-Mutlaq, the strategic ally of Mujahedin-e Khalq terrorist organization, said that the decision to relocate MKO members has been taken by Iran and that he was opposed to UN’s decisions in this regard.

On December 25, an agreement signed by Special Representative of the Secretary-General and head of the UN Assistance Mission for Iraq (UNAMI) Martin Kobler and National Security Advisor to the Prime Minister of Iraq, Faleh Fayad.

The agreement established that the Iraqi government will relocate the residents of Camp Ashraf to a temporary transit location where the UN High Commissioner for Refugees (UNHCR) will start a process of refugee status determination, a necessary first step for their expulsion outside Iraq.

Following the MOU Iraqi government paved the way for the relocation of MEK members to Camp Liberty. Finally on Saturday 18th February, 397 members of the terrorist cult were relocated to their temporary home in order to be expelled out of Iraq.