“Current status of the region is the way the Muslim nations are regaining their rights by breaking the tyrannical rules imposed on them by the superpowers and their elements in the region and the people are playing the main role.”  Seyyed Mohammad Javad Hasheminejad said.

Mentioning the historic statements of Imam Khomeini about people’s presence at the scene, Hasheminejad added: “According to Imam Khomeini’s predictions, we are now observing people awareness in the region.”

"The regional revolutionary movements have been inspired by the methods and manners of the Islamic Revolution of Iran." Habilian S.G insisted.

Son of late Ayatollah Hasheminejad then referred to the false interpretation of Islam propagated in western countries and said:

“Western media have put their back into reasoning in circles the Islamic movements and show off as if these movements are after western norms.”

MKO and Al-Qaeda, agents for creating schism in Iraq

Habilian S.G, in other part of his speech mentioned the westwrn theory of creating schism among ethnic, tribal, religious, and political subjects in the region.

"Al-Qaeda was created by America twenty years ago to make revolt in the region, to murder and destruct Shiites and support MKO making political and ethnic conflict; these are some attempts of common enemies of the two nations, in order to cause hostility and hypocrisy."  Hasheminejad remarked.

Habilian Association S.G considered development of conspiracy theory as the strategic goal of West arrogance, by which they have tried to introduce Iranian technological progresses in various fields, as existential threats for neighboring countries (in order to turn away public opinion from dealing with MKO and Al-Qaeda as the real threatens).

We bring MKO to the international courts 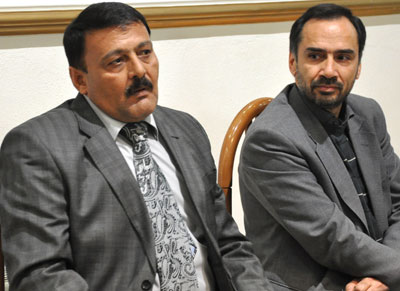 Another speaker of the meeting was Sumy Al-Zeidi, chairman of the legal committee for investigation of MKO crimes, who once again underlined the Iraqi people and government willpower for the expulsion of MKO from Iraq and said: “civil organizations would finally lay ground for the exclusion of MKO from the Iraqi land.

Pointing to western governments dual standards towards the issue of terrorism and their activities in order to create unrest and instability in the region using terrorist groups, Al-Zeidi added: “we have filed a lawsuit against MKO and are also determined to recapture our land and properties confiscated and occupied for this terrorist cult by Saddam Hussein.

Sheikh Abou Karam-al Tamimi, chairman Diyali delegation was another speaker to the meeting who called MKO a key factor in Diyali unrests and insecurities and said: “Iraqi People and government demand wholeheartedly the expulsion of MKO terrorist cult but unfortunately America wouldn’t let us do so. In fact America has changed into the main supporter of the MKO in Iraq.”

Al- Tamimi went on and said:  “After the fall of Saddam, MKO established close relations with al- Qaeda and camp Ashraf turned into a training camp for al-Qaeda suicide bombers.