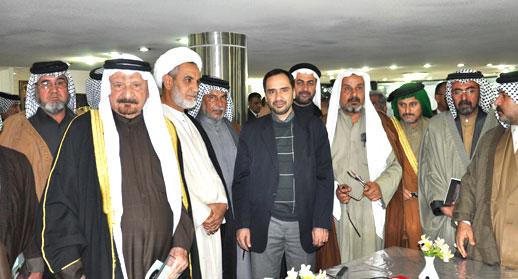 As reported by Habilian Association (families of Iranian terror victims) database, the meeting was held in order to analyze regional developments, emphasizing role of Iran and Iraq, and acquaint more the Iraqi elite figures with MKO.

Seyed Mohammad Javad Hasheminejad, Secretary General of Habilian Association, referred to Imam Khomeini's historic statements about people presence at the sense and victory of their revolution.

"According to Imam Khomeini's prediction, we are now observing people awakening over the region." Hasheminejad said.

Noting to the deception of western countries about regional revolutions, Hasheminejad stated:

“Western Media Empire seeks to seize Islamic movements and pretend that regional mass uprisings are aligned with western reforms, including economic reform, but they are essentially different.”

Habilian S.G, in other part of his speech mentioned to the long time experience of the west in order to create schism in Islamic countries and considered MKO and Al-Qaeda the main organs to achieve that.

“Al-Qaeda was created by America twenty years ago to make revolt in the region, murder and destruct Shiites, as well as to support MKO making political and marginal conflict, and these are some attempts of common enemies of the two nations, in order to cause hostility and hypocrisy.” Hasheminejad remarked.

Dr. Sumy Abide, Professor of Basra University, was another speaker who resisted: “My countrymen condemn all forms of terrorism, and concerning MKO, nearly all of them, oppose their presence in Iraq and for this purpose have conducted many protests.”