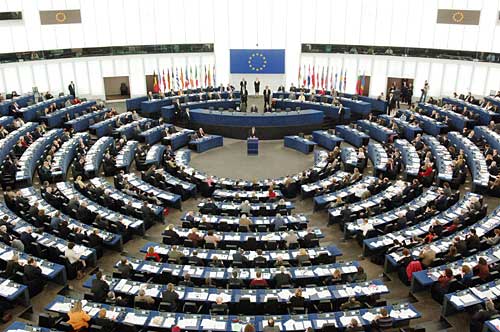 In a statement, legislators from various factions in the European Parliament have called for the trial of approximately fifty MKO terrorists in camp Ashraf in Iraq for “crimes against humanity.”

The statement was issued in response to comments made by MKO sympathiser and Vice-President of the European Parliament Alejo Vidal-Quadras, who accused Barbara Lochbihler, the Chair of the European Parliament’s delegation for relations with Iran, of making “unfounded accusations against” Ashraf residents and the MKO, referring to her comments as “a disgraceful attempt to attack this democratic opposition movement at a crucial time”.

The PMOI is known by a number of different names including Mojahedin-e-Khalq Organisation (MEK) or (MKO), The National Liberation Army of Iran (the group's armed wing) and the National Council of Resistance of Iran, a front group for the PMOI.

In April 2011, the Iraqi military raided terrorist group's headquarters at Camp Ashraf, sixty kilometres north of the Iraqi capital Baghdad. The United Nations says 34 people were killed during the raid on the camp at which some 3,500 cult members are stationed.

Shortly after this raid, German MEP Barbara Lochbihler wrote a letter to fellow MEPs arguing the PMOI had “no link to opposition forces active in Iran today” and maintaining “the claim by Ashraf residents to be cut off from water supplies was incorrect.” She stated that the “inhabitants of the camp [were] themselves victims of this totalitarian cult”.

The letter was signed by members from the parliament’s European People’s Party (EPP); Group of the Progressive Alliance of Socialists & Democrats (S&D); Alliance of Liberals and Democrats for Europe (ALDE); the Greens/European Free Alliance (Greens/EFA) and European United Left/Nordic Green Left (GUE/NGL).

The statement added: “The PMOI was protected by Saddam Hussein who hosted them from the mid-1980s until his demise. They collaborated in his internal repression against the Kurds and Shiites and have since that time had a military camp known as Camp Ashraf. When the US disarmed the camp in 2003 it housed over 3000 PMOI fighters.”

The MEPs also cautioned fellow legislators that the terrorist group had “developed a very strong lobby in the European Parliament over the last couple of years claiming to be the only serious Iranian opposition group.”

They said the recent bloodshed at Camp Ashraf “should not … distract us from an objective and level-headed analysis of the the PMOI's track record,” urging “all members [of parliament] to seriously consider the history, actions and behaviour of the PMOI before signing any declarations or letters of support in favour of this group in the future.”

“Their method is very simple: they mobilise MEPs' justified outrage at the nuclear issue, the human rights violations and they very character of the Iranian regime, but instrumentalised such opinion for a different purpose – the political legitimation of the Mudjahedin organisation itself.”

In their letter, the lawmakers criticise the lack of attention to the “massive human rights violations inside” the terrorist group. “According to overwhelming evidence the former militant group has turned into a repressive sect far removed from the respectable image the representatives of this group display when visiting the European Parliament.”

“The human rights violations the leaders are committing against the group’s members are amply documented, starting with Human Rights Watch (HRW) and many witness reports of ex-members who were able to flee (including testimonies in the European Parliament).”

In a serious blow to the European Union’s credibility and standing in the eyes of Iranians, in 2009, the union removed the death cult from its list of terrorist groups and lifted restrictions on the group's funds.

However, according the statement by MEPs, the European Court of Justice’s decision to remove the PMOI from the EU terrorist list in 2009 was based “on a formality,” taking note of the fact that “Member States who asked them to be included on the list refused to transmit the evidence on which their request was based to the court.”

“This ruling does not make any statement as to the group’s practice of internal repression.”

The MEPs voiced their concern over how PMOI sympathisers within the parliament had developed an “infatuation” with the cult, arguing, “The support the PMOI receives from members of Parliament allows its leadership to perpetuate their absolute power over the rank and file, of which most are believed to want to desperately leave the group. The hundreds of members who have managed to escape from Ashraf and have been screened by the UNHCR bear witness of their plight.”

The statement maintains the cult “lost all its credibility with the Iranian people when they formed an alliance with the Iraqi dictator Saddam Hussein.”

In the 80s, the group joined forces with the invading army of Saddam Hussein and developed an intimate relationship with the Iraqi dictator during Iran's eight-year war with Iraq. The MKO’s grisly crimes against the Kurds and Marsh Arabs in Iraq, as well as their traitorous alliance with one of Iran’s greatest enemies, have turned them into one of the most despised groups in the country.