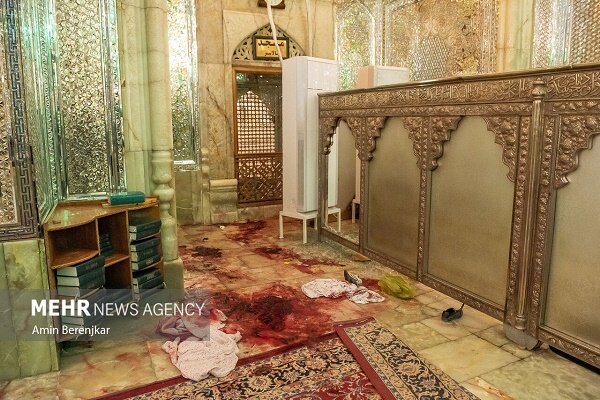 The Ministry of Intelligence announced new details about the terrorist attack in Shiraz, saying that it has arrested 26 Takfiri terrorists behind the terror attack on Shah Cheragh holy shrine.

Ministry of Intelligence of the Islamic Republic of Iran in a notification released on Monday announced that the series of operations that its forces started immediately after the October 26 terrorist attack, has continued round the clock and without interruption.

These follow-ups are ongoing in intelligence, counter-intelligence, security, and technical aspects and have become one of the most complex and extensive anti-terrorist operations of the ministry, it added, saying that the series of observations, investigations, and operations carried out so far led to the identification and arrest of all the agents who carried out the terrorist act.

The ministry went on to say that in addition, a number of other agents who entered the country to carry out similar operations were also arrested. Therefore, 26 Takfiri terrorists have been arrested so far. All the arrested people are non-Iranians with nationalities of the Republic of Azerbaijan, Tajikistan, and Afghanistan.

The main element of directing and coordinating operations inside the country is a citizen of the Republic of Azerbaijan who entered the country via the air border of Imam Khomeini Airport on a flight that departed the Heydar Aliyev International Airport in Baku, according to the ministry.

After arriving in Tehran, this person announced his presence to the coordinating element in the Republic of Azerbaijan, the ministry said, adding that the person immediately contacted the network of foreign nationals of ISIL through the operational headquarters of ISIL in Afghanistan and informed them of his presence in Tehran.

Ministry of Intelligence further noted that the supporting element of the terrorist attack in Shiraz was an Afghan individual and the shooter in the Holy Shrine was a citizen of Tajikistan.

The mentioned terrorists were pursued and arrested in the provinces of Fars, Tehran, Alborz, Kerman, Qom and Khorasan Razavi. Some of them were also arrested in the eastern borders while fleeing the country, the ministry added.

Some of the mentioned terrorists were preparing and providing necessary arrangements for other terrorist operations, including in Zahedan.

On October 26, a terrorist armed with a machine gun opened fire on the pilgrims and evening prayer worshippers at the Shah Cheragh holy shrine in Shiraz, martyred 15 innocent people, including some women, children, and elderly folks, and seriously wounding dozens.