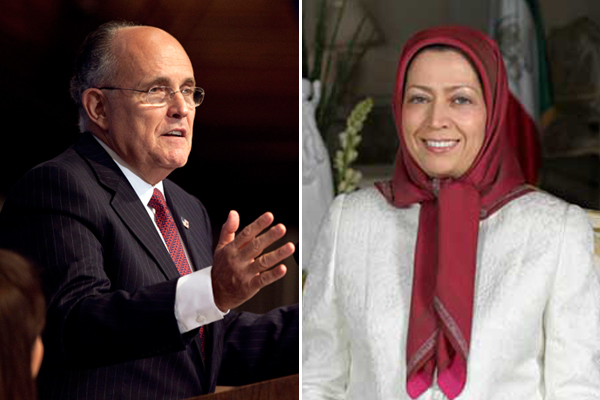 Close Trump associates have been quietly meeting with a controversial Iranian opposition group that was only recently removed from the U.S. terror list, TYT has learned.

Rudy Giuliani, President Trump’s personal lawyer, and John Bolton, Trump’s National Security Advisor, met with the group five separate times since Trump’s inauguration, according to Justice Department documents reviewed by TYT. The documents were submitted to the Justice Department by the National Council of Resistance of Iran (NCRI)—MEK’s political wing—under the Foreign Agents Registration Act, between July 20, 2017 and June 27, 2018.

That group, the People’s Mujahedin of Iran, or MEK for short, was designated a terrorist organization by the U.S. State Department until 2012, at which point it was removed from the State Department’s terror list after an intense lobbying effort. The group was on the terror list for good reason: MEK has killed several American servicemembers and contractors; attempted to assassinate a top U.S. general; and attempted to kidnap the U.S. Ambassador to Iran, Douglas MacArthur II.

In 1992, the MEK conducted a terror attack on the Iranian mission to the United Nations in New York, making it one of the few terror groups to have operated on U.S. soil, according to Daniel Benjamin, the former coordinator for counterterrorism at the State Department.

The group has been widely characterized as a cult. As The Intercept’s Mehdi Hasan recently noted, a State Department report found that MEK’s leader “fostered a cult of personality around himself” which had “alienated most Iranian expatriates, who assert they do not want to replace one objectionable regime for another.”

A RAND Corporation report also described MEK’s practices as “authoritarian [and] cultic.” The report cites Iranians who “likened the MEK to the Khmer Rouge and the Branch Davidian cult in Waco, Texas.”

The Justice Department documents reviewed by TYT show that Giuliani attended three meetings with NCRI since Trump’s inauguration. One meeting took place on February 10, 2017, and another on May 10, 2017; both included the same vague description: “to discuss the situation in Iran and the Middle East.”

A third meeting took place on February 27 of this year, “to discuss the protests in Iran.”

As for Bolton, he met with NCRI two times since Trump’s inauguration. One meeting took place on April 13, 2017, “about the nuclear weapons program of Iran.” The other meeting was on August 2, 2017, and is described in vague terms: “Meeting [with] Mr. Bolton.”

After being shown the documents, Trita Parsi, president of the National Iranian American Council,  told TYT, “This shows that it’s very difficult to take the Trump admin. seriously when he says he’s looking for diplomacy and a better deal. If Trump actually, genuinely, wants diplomacy, at the end of the day, he’s going to have a difficult time because his associates are so closely allied with the MEK, who are adamantly opposed.”

Although Trump has said he is open to diplomacy with Iran and that he merely ended the Iran Deal in search of a “better deal,” administration officials like Bolton have advocated for regime change in Tehran.

In 2017, Bolton told a crowd of MEK members, “The declared policy of the United States should be the overthrow of the mullahs’ regime in Tehran.”

Bolton concluded the speech by promising regime change before 2019.

Giuliani has expressed similar sentiments. In March, he led a crowd of MEK members in chanting, “regime change.”

These may not be empty words. On Thursday, the Australian Broadcasting Corporation reported that the Trump administration is preparing to bomb Iran’s nuclear facilities “as early as next month,” citing senior figures in the Turnbull government.

Asked about the Trump team’s interest in the group, Parsi told TYT,  “MEK are valuable to them because they have training in sabotage, assassination, and terrorism. There’s no other Iranian opposition group that can provide this. It also provides them with a facade of claiming what they’re doing is actually supported by the Iranian people.”

This article was originally published by TYT