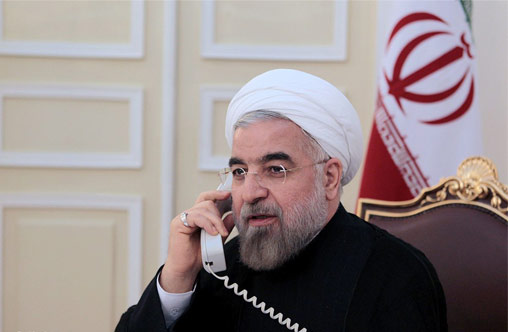 President Rouhani had a phone conversation with the President of Syria, Bashar Assad and stressed that the Islamic Republic of Iran will continue to stand by the Syrian government and nation in their fight against terrorism.

In the phone call that was held late on Saturday, President Hassan Rouhani congratulated the recent victories of the Syrian government and nation against terrorists, and said: "Some Arab powers and their followers in the region thought that ISIS would seize Iraq or Syria, or that they would continue to commit crimes and destroy this region for years to serve their interests".

The two Iranian and Syrian nations have done a great job during these years of fight, said Rouhani adding: "The Islamic Republic of Iran is ready to actively participate in the reconstruction process of Syria".

"The strategic relations between Iran and Syria will continue and we will continue the right path together to benefit the two nations and peoples of the region," the president said, adding that the Iranian nation and government, like the Syrian people and government, become very happy with every step of the victory that is taking place in Syria against terrorism.

"We also believe that the Syrian government's opponents must also make advantage of this opportunity and contribute to the future of Syria, based on their position," said the president, saying that Iran will stand by Syria in the government's political steps.

Dr Rouhani referred to the Sochi Summit, saying: "The Sochi Summit, hosted by the Russian president with the participation of the Presidents of Iran and Turkey, was a good step in the right time, and the three countries agreed in Sochi that holding the National Congress of Syrian-Syrian Dialogue in the current situation can be a good step towards the stability and security of Syria".

The president also referred to the mean statements made by an authority of one of the countries of the region against Iran, saying: "The Islamic Republic of Iran is seeking peace, stability and brotherhood and security throughout the region, and in the same vein, we believe that if some of the leaders of Arab countries speak as inexperienced as this, they are not speaking on behalf of their people".

It is a wonder that a country in our region considers the Iranian nation as enemy and the Zionist Regime as friend, he said, adding: "Unfortunately, the inexperienced officials of some countries of the region sometimes say things that are the same words of the Zionist Regime".

"We all know that this cancerous tumor has committed great crimes in our region over the past 70 years," the president said, adding "I hope that in the future, leaders of some Arab countries will also get on the right track, and not take any new steps detriment to themselves and the whole region".

Referring to the collapse of the last bases of the ISIS in the country, Bashar Assad pointed out: "This victory is indebted to the efforts of brave men who stood by the Syrian people in the fight against the terrorists".

He described the stances of some countries in the region, and especially the Arab League, against Iran as the result of the recent victories over ISIS in Syria and Iraq, saying: "The Arab League's positions are undoubtedly not the positions of Arab nations, and we appreciate the Iranian nation and government's support in the fight against terrorism".

The Syrian president also called for active participation of Iran and private sector companies in the process of rebuilding the country.