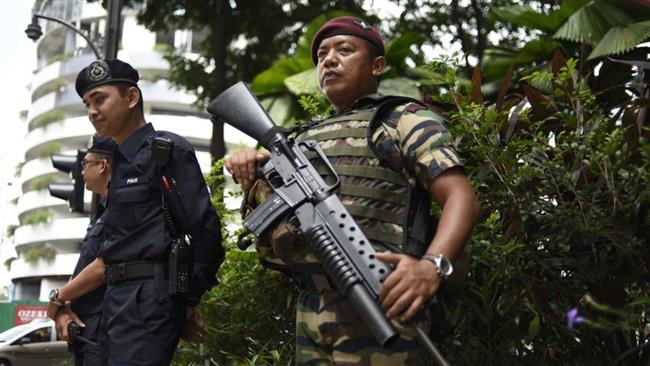 Security forces in Malaysia have killed a senior leader of the Philippines-based Abu Sayyaf Takfiri terrorist group in a shootout off the coast of the eastern province of Sabah on the island of Borneo, the Philippine military says.

"…it neutralized one of the notorious bandits and will degrade their capability for spotting and kidnapping victims in the future," the spokesman added.

He went on to say that two other terrorists had also been killed alongside Hamid in the gun battle with Malaysian police off the town of Lahad Datu in Tawau Division in the eastern parts of the province on Thursday night. Two more militants were also arrested in the incident.

The militants had kidnapped skippers of two fishing boats when they were confronted by Malaysian security forces. The confrontation lasted some 20 minutes. Search continues for two remaining kidnappers, who apparently fled the scene.

The slain leader was involved in a deadly kidnapping, among other crimes, last year, when several foreigners were abducted in a tourist resort in the volatile southern Philippines. Two of the abductees were later beheaded after the required ransom was not paid.

"Do not give any room whatsoever to the criminals to encroach into the country's territory and cause chaos. Continue to safeguard the country's waters, borders and sovereignty," the premier said in a blog post on Friday, addressing the security forces.

Based primarily in and around the islands of Jolo and Basilan in the southwestern regions of the Philippines, the Takfiri terrorist group has been conducting bombings, abductions, assassinations and extortion since its foundation in 1991 with seed money from al-Qaeda.

The ultra-violent terrorists, who pledged alliance to the Daesh Takfiri terrorist group in the summer of 2014, have also been involved in other criminal activities, including rape and drug trafficking, in what they describe as their battle for an independent province in the Philippines.

The loose criminal network of Abu Sayyaf, literally meaning “Father of Swordsmith” in Arabic, has reportedly diminished greatly in number after it lost over 800 militants in 12 years since 2000, shrinking to a group of between 200 and 400 members, but continues to survive on ransom and extortion.

The militants have been in constant clashes with Philippine forces across the troubled region in the past 25 years.