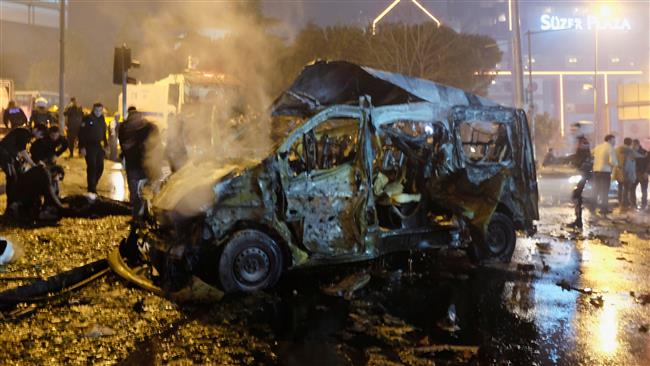 The first explosion was the result of a car bomb going off outside the Besiktas stadium on Saturday, while the second blast happened as an attacker blew himself up in a nearby park, said Interior Minister Suleyman Soylu, while adding that 27 of those killed were police officers.
Soylu added that the stadium blast had targeted a police bus after a high profile football match.

“The explosion at Macka Park is believed to have been carried out by a suicide bomber," he noted.

He went on to say that 10 people have so far been detained in connection to the attacks.
Prime Minister Binali Yildirim told the CNN-Turk broadcaster, “I curse the murderers strongly."

Turkish President Recep Tayyip Erdogan, who was in the city when the blasts occurred, said that they were timed at the end of the match to cause the maximum amount of casualties.
"An act of terror targeted our security forces and citizens at Besiktas tonight," said Erdogan, adding, “Unfortunately we have martyrs and wounded."

"We have witnessed once more here in Istanbul the ugly face of terror which tramples down any form of value and morals," he added.
He further stressed that the name of the perpetrators of the vile attack is irrelevant. "Nobody should doubt that we will defeat terror, terror groups, terrorists and of course the forces behind them, with God's help," he added.

No individual or group has claimed responsibility for the attack yet.

"Those attacking our nation's unity and solidarity will never win," said Turkish Sports Minister Akif Cagatay Kilic via his Twitter account, while Transport Minister Ahmet Arslan referred to it as a terrorist attack.

The blasts were also condemned by NATO Secretary General Jens Stoltenberg, who called the attacks "horrific acts of terror."
Turkey has seen attacks on a host of targets over the past year and a half. Most of the bombing attacks have been blamed on the Daesh Takfiri terrorist group, Kurdistan Workers' Party (PKK) and other Kurdish groups.

In June, at least 41 people were killed and some 240 more injured in a Daesh attack at Istanbul's main Ataturk Airport.

Turkey has also so been under a state of emergency since a failed military coup against the government in mid-July. Ankara has launched a heavy-handed crackdown against those suspected of having links with the coup plotters.