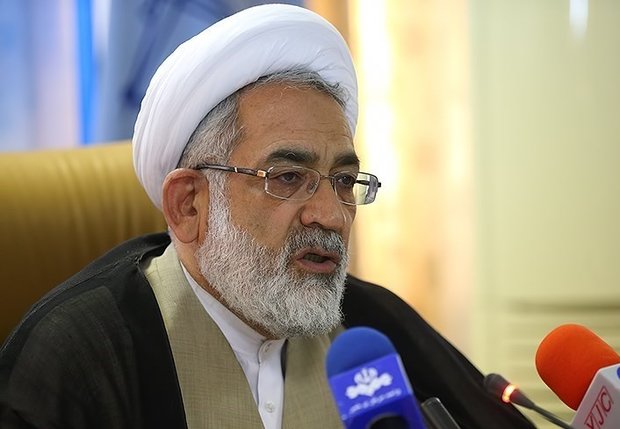 TEHRAN, Nov. 30 (MNA) – Iran’s Prosecutor General Mohammad Jaafar Montazeri said Wed. that multinational terrorist groups such as ISIL and Al Qaeda are the sinister legacy of Western intelligence services with US and Israel in the lead.

The Iranian Prosecutor General made the remark in his address to the 14th meeting of the Prosecutors General of the Member States of the Shanghai Cooperation Organization on Wednesday.

Montazeri maintained that the emergence of terrorist groups was originally aimed at altering the hegemony, stability and security in the region, which was then regrettably taken advantage of by certain governments and political parties for financial and economic gains.

He deemed Iran the biggest victim of terrorism which has lost 17,000 including officials and civilians to terror attacks in the past 38 years.

He went on to add that the terrorist groups such as ISIL, Al Qaeda and Taliban have been created and sponsored by certain regional and Western countries, in particularly the US, and regrettably, they still continue their acts of terror with the support of these very same countries' backing.

Montazeri stressed that the only way to combat terrorism is a serious confrontation and elimination of its perpetrators, noting however, that while terrorists could be pushed back or eliminated, the ideology of terrorism will continue to prevail.

“So far, 10 conventions and two protocols for combating terrorism have been ratified by the UN in the past several years, and the international community has reached consensus on condemnation of terrorist acts, but unfortunately the lack of executive and operational approaches have prevented any positive results,” he said.

Montazeri expressed hope, however, that the Wed. Summit would be able to bring about valuable and constructive practical results for the people in the world, and went on to discuss his own practical proposals in four different topics.

Montazeri who is currently in China at the head of a delegation has earlier held talks with his counterparts from China, Kazakhstan and Kyrgyzstan on the sidelines of the 14th meeting of the Prosecutors General of the Member States of the Shanghai Cooperation Organization.