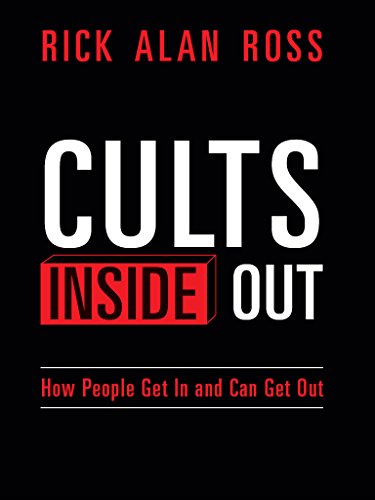 New Book "Cults Inside Out: How People Get In and Can Get Out"
How do individuals get involved with cults in the first place, and what steps can be taken to “deprogram” and heal those who have been drawn into these damaging groups? These questions and more are addressed in Cults Inside Out, written by well-known cult expert Rick Alan Ross. Over the course of three decades, Ross has participated in about 500 cult interventions, provided expert court testimony, and performed cult-related work all around the world. With the help of current and former cult members, Ross demonstrates many of the tactics the groups use for control and manipulation—and, more importantly, some of the most effective methods he and other experts have used to reverse that programming. As a result, readers will find themselves armed with a greater understanding of the nature of destructive cults and an improved ability to assess and deal with similar situations—either in their own lives or the lives of friends and family members.
History of Cults
Cults Inside Out includes a detailed modern history of destructive cults from Charles Manson to today. An array of groups based upon religion, politics, environmental concerns, family ties and training. This carefully researched book reflects the increasing diversity of the present cult phenomenon. Cults Inside Out provides the nucleus for a definition of a destructive cult and explains how so-called “cult brainwashing” really works.
Cult Intervention
Never before has a book examined and discussed the cult intervention process, often called “deprogramming,” in such detail. Readers of Cults Inside Out will find a step-by-step analysis that includes assessment, preparation and an in-depth clarification of the intervention process broken down into easy to understand blocks with actual case examples, such as the deprogramming of a Scientologist, a Falun Gong practitioner and a young woman trapped within an abusive controlling relationship.
List of Cult Characteristics from Cults Inside Out
1)The leadership of the group has absolute authority without any meaningful accountability.

2) There is no genuine democratic form of governance that would offer any meaningful checks or balances to the power of the leadership through elections, a constitution, or bylaws.

3)There is no meaningful financial disclosure or transparency regarding the group’s money or assets.

4) There is no detailed and independently audited financial statement or budget published or distributed to the members or contributors annually, disclosing in detail all salaries, compensation, and expenses paid out from group funds.

5)Only the leadership and its chosen few really know about the finances of the group in any depth.

6)  Leaders define what is right and wrong, and group members are expected to essentially defer any meaningful value judgments of their own.

7) A kind of learned dependence often develops regarding problem solving and conflict resolution.

8) There is notable and extreme hyperactivity in the group, which is completely centered on the agenda of the leadership, with little, if any, meaningful consideration for the goals of individual members or their interests.

9)The group deliberately isolates its members in a substantially controlled environment.

10)  Information is controlled by creating strict rules or guidelines regarding such things as books, outside reading, television, movies, radio, and music.

11)Members may be prohibited contact with anyone who might express independent or opposing ideas, doubts, or negative feelings about the group.

12)The group and its leaders are seen as absolutely necessary to filter out the contamination of the outside world. There are no meaningful boundaries.

13)There is no area of a member’s life that appears to be private and therefore immune from the leadership’s scrutiny.

14)The group promotes unreasonable fears about the outside world. This may be expressed through predictions of impending catastrophe, obsessions about evil conspiracies, or seemingly exaggerated claims and paranoid suspicions about the group’s perceived enemies.

15) The group perpetuates an ethos of perfectionism.

16)Members subsequently feel that they can never be “good enough “and are forever striving to further prove themselves.

17) The group devalues self-esteem and individual expression and considers them “selfish.”

18) Group members who try to question leadership or express ideas outside the group mind-set are characterized negatively with such labels as “ego driven,” “rebellious,” “suppressive,” “demonic,” or “satanic.”

19) Former members once associated with the group often relate the same allegations of abuse by the leadership. This repetition reflects a continuing pattern of grievances.

Author Rick Ross is the founder and executive director of the Cult Education Institute (CEI), which is an online library initially launched in 1996. The CEI www.culteducation.com database contains research material about hundreds of controversial groups and movements.