Seyyed Ali Hesari was born in Qazvin, capital of the Province of Qazvin on February 23, 1963. His father was a driver assistance and his mother was householder. He had studied up to second grade middle school. Then he joined the Revolutionary Guards.

On Thursday, September 17, 1981 Seyyed Ali was assassinated by a terrorist named Ibrahim Nademi, who had assassinated a teacher named Ghodratollah Chegini 14 days earlier. Hesari was killed as a result of gunshot wounds to the head and chest.

In his will, he has warned about the penetration of terrorist groups and demanded people fighting against them as much as they can. Hesari’s sepulcher is in the Martyrs’ graveyard in Qazvin. 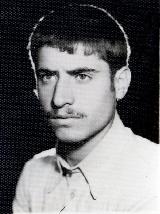