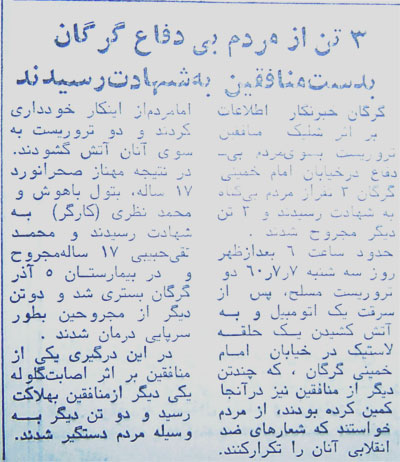 Three residents of the city of Gorgan were martyred by members of the terrorist Mojahedin-e Khalq Organization on September 29, 1981.

MKO members killed three innocent people and wounded three others after shooting unarmed citizens in Khomeini Street in the northern city of Gorgan.

It was about six o'clock in the afternoon that a gang of MKO members stole a car and set fire to a car tire in Khomeini Street. Then they tried to force people to chant their anti-revolutionary slogans. As the people refrained from satisfying their demand, they opened fire on citizens as a result of which Mahnaz Sahranavard, 17 years old, Batoul Bahoush and Mohammad Nazari, who was a worker, were killed and Mohammad Taghi Habibi, 17, was wounded and sent to hospital and two other citizens were not seriously injured.

In this incident one of the terrorists was killed by a friendly shot and two other terrorists were seized by the people.