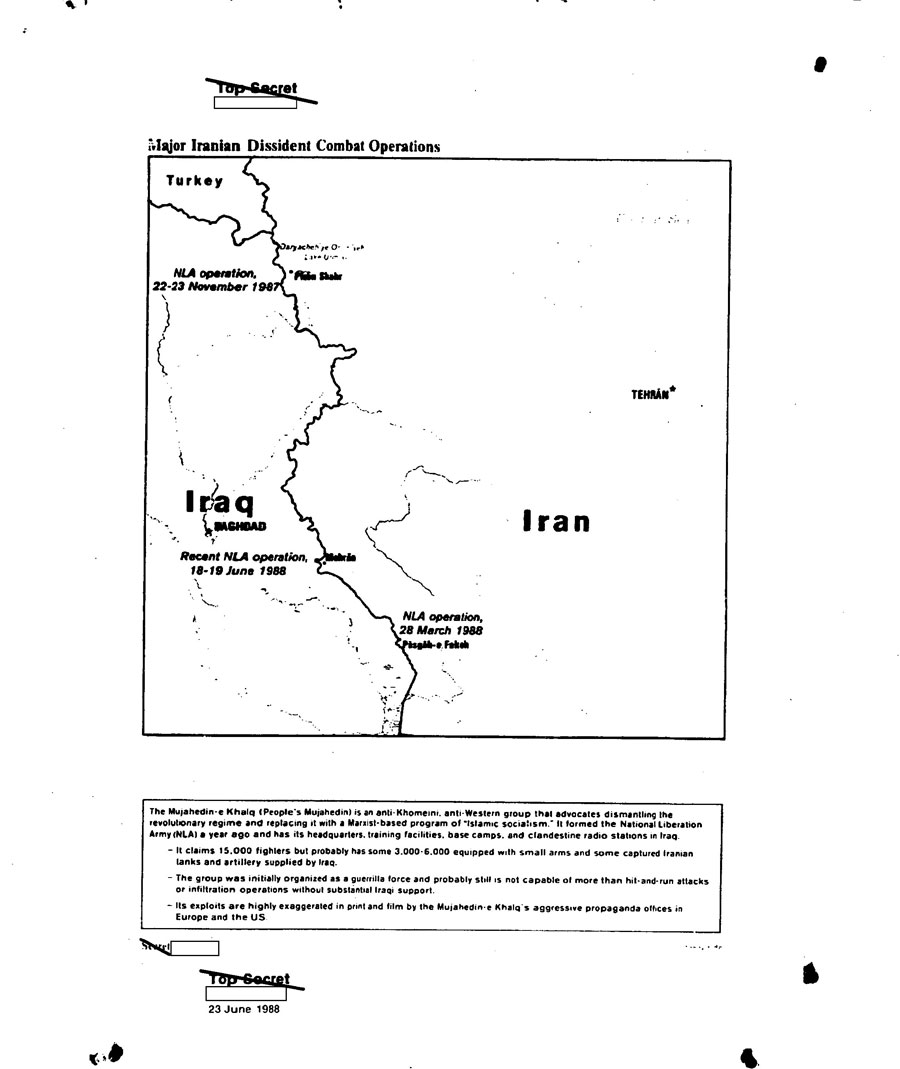 A report by the Office of the United States Director of Central Intelligence dated June 23, 1988, reveals a part of MKO’s high treasonous acts against the Iranian nation during the 1980-1988 Iraqi imposed war on Iran.

“The Mujahedin-e Khalq (People’s Mujahedin) is an anti-Khomeini, anti-western group that advocates dismantling the revolutionary regime and replacing it with a Marxist-based program of Islamic socialism. It formed the National Liberation Army (NLA) a year ago and has its headquarters, training facilities, base camps, and clandestine radio stations in Iraq.

It claims 15000 fighters but probably has some 3000-6000 equipped with small arms and some captured Iranian tanks and artillery supplied by Iraq.

The group was initially organized as a guerrilla force and probably still is not capable of more than hit-and-run attacks of infiltration operations without substantial Iraqi support.

Its exploits are highly exaggerated in print and film by the Mujahedin-e Khalq’s aggressive propaganda offices in Europe and the US.

IRAN-IRAQ: The Capture of Mehran

Iraqi forces were indispensable in the successful attack the National Liberation Army-- the combat arm of the dissident Iranian Mujahedin-e Khalq -- made on Mehran Sunday... Iraqi aircraft, armor, and artillery units strongly supported the dissidents, and the advance of Iraqi tanks almost certainly forced the Iranian withdrawal.

Comment: The victory, though minor, is another setback for Tehran and means problems for the already stretched Iranian ground forces. Rather than risk facing an Iranian counterattack, the national Liberation Army probably will withdraw from the city it captured. Baghdad is likely to continue helping the dissidents, who survive primarily on Iraqi support and on publicity from their exaggerated claims of military success. Their association with Iraqi probably will continue to alienate most Iranians and impede expansion of their limited network of sympathizers in Iranian cities.”