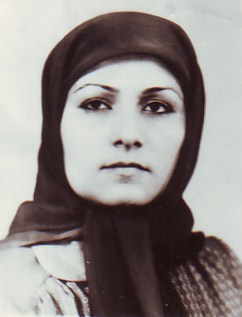 Sakineh Beygom Niknejad was born in 1946 in Behbahan, a city in the Southwestern Khuzestan province. She was the first child born to a stay-at-home mother and a father who worked as a contractor. She was known for a generous and altruistic behavior since her childhood. Although she was so young, she was so selfless and always tried to lift weight off others’ shoulders.

Being a studious and diligent student, she received a high school diploma sat for teacher training exam. She was admitted for the college and after two years of studies went to teach at a school in Boroujerd. She resumed her studies and received her BA in Educational Training. She was married to a tradesman and settled in Tehran. The days have passed, one after another, and Sakineh was doing her job as a teacher as well as a housewife. As a mother, she was also tasked with the responsibility of raising her children.

As a modest and chaste mother, Sakineh Beygom Niknejad brought her children up according to the Islamic teachings and introduced the Infallible Imams as their role model. Even though she was snowed under with work outside home, she successfully managed her household affairs.

On March 3, 1982, Sakineh left for work earlier than usual to catch the congregational prayer. When she reached the school, all the students had gathered in the prayer room. As she joined the rows of the worshippers, one of the teachers cried out warning the MKO’s intrusion to the school.

A number of MKO terrorists, who were heading to Karaj for an operation, were involved into a bloody clash with the forces of Islamic Revolutionary Committee. All the MKO members were killed in the clash, but two of them escaped. They made their way to the school and determined to create chaos over there in order to affright the revolutionary forces.

Sakineh hurried to the entrance to prevent MKO terrorists’ intrusion. They started firing continuously, leading to the heart attack of one of the students who had already suffered heart problems. She hurried out to fetch a glass of water for him, but was shot to death in cold blood when she tried to return to the prayer room.