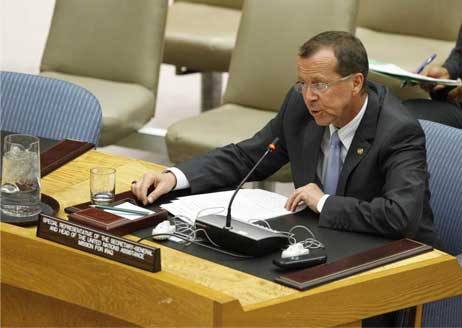 Kobler (UNAMI) made the remarks while briefing the Foreign Affairs Committee of the European Parliament (AFET) on the current developments in Iraq in a meeting on May 29.

He deplored the lack of cooperation of the residents and of their leadership with the UNHCR and UN monitors, and urged them to accept concrete resettlement offers. Stressing that "resettlement to safe countries is the only durable option", he called again on European Union member states to accept former Camp Ashraf residents into their countries.

Meantime, reports said on Saturday that MKO members are running away from the group's transient settlement facility, Camp Liberty, before they are sent by their leaders to other countries.

According to a report by Ashraf News website, an informed source in the committee supervising the Camp Liberty affairs said that five MKO members had fled the Camp two days ago.

The informed source named the defectors as Arshad Shekarzehi and Hassan Sha'bani as well as three other members who were not named.

They surrendered to the Iraqi security forces and were transferred to the UN mission in Baghdad, the source added.

Many of the MKO members have abandoned the terrorist organization while most of those still remaining in the grouplet are said to be willing to quit but are under pressure and torture not to do so.