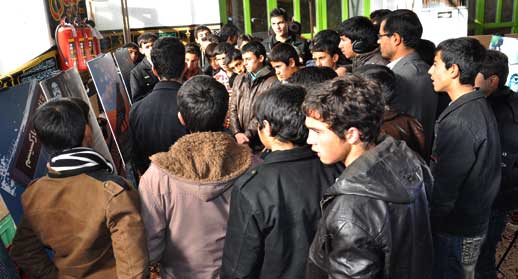 Habilian Association organized the exhibition at the grand mosque of Rivash with the purpose of reviewing new and old hypocrisies, the history of Mujahedin e-Khalq organization (MEK, MKO, PMOI…), MEK’s inner-ethnic relations, Green hypocrisy and its leaders’ eclectic thoughts, the background of two deviant cults, Hojjatieh Society (a deviant branch of Shia Islam founded in 1953 by Shaikh Mahmoud Halabi) and Bahá'í cult (founded by Baha’u’llah in 19th-century), and an introduction of terror martyrs in Iran.

Widely welcomed by the exhibitors, the exhibition included some 160 posters which in addition to the topics mentioned above, included some information on: self-immolations in the MEK cult, MEK’s false interpretation of Islam, Mossad and MEK’s roles in assassination of Iranian nuclear scientists, MEK’s treasons during the Iraqi imposed war on Iran.

Confessions of some detained rioters in 2008 post-election riots in Iran, MEK’s connection to the riots, and a review on behind the scenes of the so called Human Rights activities in the country were among other details presented to the visitors.

Some unknown aspects of deviant Baha’i cult and Hojjatieh Society were also explained. Other Habilian products presented in the exhibition included software, sounds and videos related to the discussed topics.