The Exhibition, which was the latest in a series of Habilian’s exhibitions, provided a great deal of ‎‎enlightenment about the hypocrisy (MEK) and deviant sects in Iran by presenting a number of ‎‎pictures, posters, software products, and documents.‎

The seven-day exhibition was greatly received by university students and professors. During the ‎‎exhibition, some ‎‏100‏‎ posters depicting documents of anti-revolutionary and hypocritical groups, ‎history ‎of terrorist MKO group, intellectual foundations of the grouplet’s leadership and their ‎Marxist outlook ‎were put up in the exhibition.‎

MEK’s history of cult-like practices, including its authoritarian control, brainwashing, isolation ‎from ‎family members, mandatory divorces, sexual exploitation of female members, and ‎prevention of ‎members from leaving the organization were among the main parts of the exhibition about the ‎‎terrorist Mujahedin-e Khalq Organization.‎ 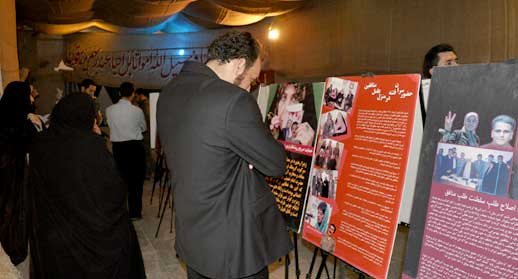 The visitors were also provided with images and documents analyzing the ‎‏2009‏‎ post-election ‎events, ‎‎‎MEK’s role in the unrest and the introduction of the seditionists’ leaders.‎

The visitors had also the opportunity to see posters of Iranian nuclear scientists with such information ‎as their biographies, ‎education, and assassins‎.‎