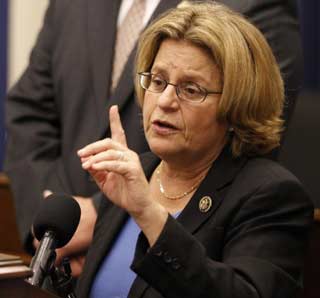 Tensions between Foggy Bottom and supporters of the Mujahedeen e-Khalq (MEK), a State Department-designated foreign terrorist organization opposed to the Iranian regime, have been building for months. The plan to relocate 3,200 members of the group from its compound in Iraq to a former U.S. military base appear stalled as the group lobbies to be taken off the list of terrorist organizations.

A federal court has ordered the State Department to make a decision on delisting the MEK by October, and Secretary of State Hillary Clinton has indicated that the group's willingness to complete the move to the former base, Camp Liberty, will be a key factor in the department's decision. State Department officials, however, now believe the MEK is stalling.

"It is past time for the MEK to recognize that Ashraf is not going to remain an MEK base in Iraq," Daniel Benjamin, the State Department's coordinator for counterterrorism, told reporters on a conference call earlier this month. "The Iraqi government is committed to closing it, and any plan to wait out the government in the hope that something will change is irresponsible and dangerous."

Administration officials believe the MEK is getting bad advice and unhelpful support from its team of American advocates, some of whom are paid handsomely to advise the MEK and lobby the administration on its behalf (though all insist they are promoting the MEK's cause out of sincere conviction). The Treasury Department has opened an investigation into the funds paid to these activists, which often come from Iranian-American groups in the United States and are paid through a speakers' bureau.

An administration official told The Cable that the efforts on behalf of the MEK of Americans like Rudy Giuliani, Tom Ridge, Ed Rendell, James Jones, Mitchell Reiss, and now Newt Gingrich represent "sheer irresponsibility and greed which puts people's lives at risk,"

The Brunswick Group, the firm representing the advocates, declined to comment.

The MEK seems to believe it can keep control of Camp Ashraf, its longtime compound near the Iran-Iraq border, and Clinton will still be under pressure to delist the group, this official said.

"What bothers all of us working for a peaceful solution is that the MEK seems to believe all they have to do is hold firm and do whatever they want. They are being encouraged in this view by some of their American supporters," the official said. "If you are [MEK leader Maryam] Rajavi and are surrounded by all these people, you may think they can actually deliver and that is just terrible."

This week, the MEK got the support of two new powerful Americans, House Foreign Affairs Committee Chairwoman Ileana Ros-Lehtinen (R-FL) and Rep. Brad Sherman (D-CA). The pair are circulating a letter this week to Clinton asking her to improve the conditions in Camp Liberty for the MEK.

"We respectfully request that the Department of State seek the Iraqi government's agreement to and implementation of a number of humanitarian measures. Until these measures are implemented, further voluntary relocation of Camp Ashraf residents would only exacerbate the current dreadful living conditions in Camp Liberty," the lawmakers wrote in the draft letter, obtained by The Cable.

Specifically, the lawmakers are requesting that the MEK residents in Camp Liberty be connected to the Iraqi main water system, be given more power generators, and be given new cars and trucks and other supplies. The administration official said that some of the requests are valid but the characterization of the conditions in Camp Liberty as "dreadful" is unfair.

Ambassador Dan Fried, the State Department official in charge of aiding the relocation of the MEK from Camp Ashraf, held a conference call with congressional staffers Tuesday, having just returned from Iraq. One staffer on the call said Fried was "furious" over congressional attempts to interfere in the transfer of MEK members to Camp Liberty. The Iraqi government has set a July 20 deadline for closing Camp Ashraf but the MEK are refusing to go, Fried told the staffers.

Fried said the Ros-Lehtinen letter was deeply unhelpful in that it further hardened the MEK's attitude against compromise, according to one witness sympathetic to his argument.

"From my perspective, these congressional attempts to placate the MEK's refusal to leave Ashraf is nothing short of irresponsible," this staffer said. "It's pandering of the worst sort and completely undermines U.S. policy. It's clear that Ros-Lehtinen and Sherman aren't actually interested in resolving the standoff, but posturing for political purposes by carrying the MEK's water."