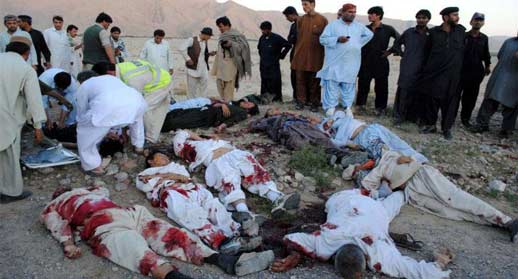 “Failed of creating sectarian and tribal conflicts in Pakistan, the enemies of Pakistani people found the only way to murder and retaliate against the followers of Ahlul Bait in various parts of Pakistan,” the statement reads.

According to the reports, Shia Muslims have experienced a hike in attacks by pro-Taliban militant groups in various parts of Pakistan over the past years. Local sources say more than 2,000 Shia Muslims have been killed in the northwestern Kurram region close to the Afghan border since 2007. Earlier last month a group of armed assailants attacked a bus in Kohistan region of Giligit, killing 19 pilgrims. Some ten days later, again a bus carrying Shia pilgrims were attacked by terrorists, killing several others.

The statement continues, “Is there any rhyme or reason to a bunch of terrorists flagging down four buses, boarding them, asking the passengers whether they are Shia or Sunni, asking the Shias to step out of the buses and then pumping bullets into them?”

“Even though the killings resulted in staging numerous protests across the country, it is totally regrettable to see that the alliance of Saudis with world’s major news channels caused the crimes of some superficially Muslim not to be reverberated across the world,” it adds.

“Five thousand Shia Muslims in Pakistan have announced that they will not end their strike untill they meet their demands and see those responsible to be brought to justice,” the statement continues.

“As the representative of over 17000 families of terror victims, Habilian Foundation strongly condemns the the massacre of Shia Muslims in Pakistan and urges the Government of Pakistan to investigate, prosecute and punish all those responsible for the attacks.”