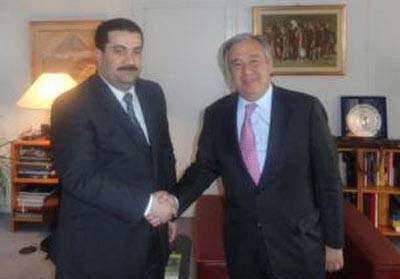 According to a report published by Habilian Foundation (families of Iranian terror victims), the issue was raised by Gutierrez in a meeting with Iraqi Minister of Human Rights Muhammad Shia al-Sudani.

"The commissioner doesn't grant asylum to groups and organizations, rather asylum is granted to individuals under the condition of abandoning violence," he noted.

He added that the UNHCR has opened several ways for talks with a number of European states in a bid to find a third party to host the MKO terrorists.

The two officials also discussed the memorandum of understanding signed between Iraq and the United Nations on the procedures for the expulsion of the MKO from Iraq.

The latest reports said that expulsion of the cult members is imminent, while over 1,600 Ashraf residents are willing to voluntarily return to Iran.

The reports also indicated that Iraq has issued arrest warrants for some 70 MKO members who were terror chiefs, torturers and interrogators.

Based on a memorandum of understanding signed on 25 December between Iraq and United Nations, the MKO members are temporarily transferred to a former US military base for the United Nations High Commissioner for Refugees (UNHCR) to determine their refugee status.