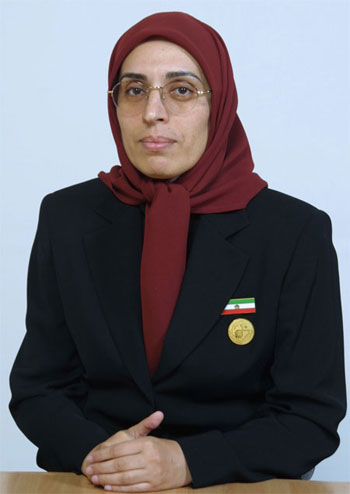 Zohreh Akhyani is 48 years old and from the city of Shahroud, northeast Iran. She has a 29 year old daughter. She joined the terrorist cult organization Mojahedin-e Khalq of Iran (MKO, MEK, NCRI, NLA) 32 years ago following the Islamic revolution in Iran in 1979.

She has been introduced to the MKO terrorist cult by her husband, Ali-Naqi Haddadi (Kamal).

The first confrontation with Iraqi people during the Iraqi Kurds suppression by MKO took place in Kirkuk tee, under the direct order of Maryam. The direct commandant of the fight was the commandant of 26th division of Rajavi's forces – Ali Naqi Hadadi (Kamal) who was taken on a one way ride because he hesitate to kill the people hard-heartedly. Thus he was discharged in the same location and a woman named Behjat was appointed instead of him.

Mohammad Hussein Sobhani, a former member of the terrorist Mujahedin-e-Khalq organization, delivered a speech addressed to members of the European Parliament on March 27, 2007. “I would like to ask those who support the MKO, and I am glad that they are present here at the moment; … Why is the marriage of men and women forbidden in the organization and why is the punishment for adultery the death sentence? Why was Ali-Naqi Haddadi executed on this charge? ...” Sobhani said in that meeting.

In 1994 Ali-Naqi Haddadi, one of the high ranking officials of the MKO terrorist organization, became uncomfortable with the path pursued by the Rajavi, the cult's leader. He had some objections to the cult’s policies, namely the "ideological revolution" in which divorces were dictated.Thus, he had been mysteriously disappeared.

However, ever since the "ideological revolution," when divorces were mandated, he became uncomfortable with the path pursued by the leadership. His differences with the leadership of Masoud and Maryam Rajavi and other members of the Central Committee reached a climax in 1992.

His wife, Zohreh Akhyani was elected as a deputy to the Executive Committee in 1989 and became a full member three years later. In 1993, she was elected as a member of the PMOI's Leadership Council. Akhyani was the representative in Germany of the National Council of Resistance of Iran (NCRI), the political wing of the Mujahedeen-e Khalq (MEK), from 1997 to 1999 and Deputy Secretary General from 2001 until 2011.

On September 6, 2011, the People's Mojahedin Organization of Iran (PMOI) elected Zohreh Akhyani as its new Secretary General for a two-year term.