Speaking in a meeting with Secretary-General of Iran's Habilian Association - a human rights group formed by the families of 17,000 terror victims in Iran - Sadr stressed that no one in Iraq likes to see MKO's presence on Iraq's soil.

"This terrorist group has committed more crimes and oppressions against us than the crimes it has committed against the Iranian nation since the number of martyrs in Iraq is twice the number in Iran. "Therefore, we have a very deep motivation for expelling these criminals from our country," Sadr underscored. 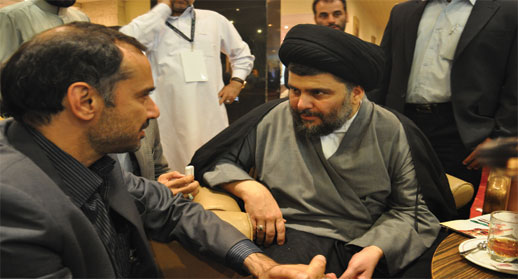 The group fled to Iraq in 1986, where it was protected by Saddam Hussein and where it helped the Iraqi dictator suppress Shiite and Kurd uprisings in the country.  The terrorist group joined Saddam's army during the Iraqi imposed war on Iran (1980-1988) and helped Saddam and killed thousands of Iranian civilians and soldiers during the US-backed Iraqi imposed war on Iran.

Since the 2003 US invasion of Iraq, the group, which now adheres to a pro-free-market philosophy, has been strongly backed by neo-conservatives in the United States, who also argue for the MKO to be taken off the US terror list. The MKO has been in Iraq's Diyala province since the 1980s. Iraqi security forces took control of the training base of the MKO at Camp Ashraf - about 60km (37 miles) North of Baghdad - in 2009 and detained dozens of the members of the terrorist group. The Iraqi authority also changed the name of the military center from Camp Ashraf to the Camp of New Iraq.