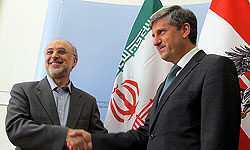 "Any kind of terrorist activity will be severely confronted by Austria," Spindelegger said in response to the question why the EU shows a double-standard attitude in the war on terrorism and struck the name of the terrorist Mojahedin-e Khalq Organization (MKO) off the list of terrorist groups.

Spindelegger made the statement during a press conference with Iran's visiting Foreign Minister Ali Akbar Salehi in Vienna on Tuesday. The MKO, whose main stronghold is in Iraq, is blacklisted by much of the international community, including the United States.

The MKO is behind a slew of assassinations and bombings inside Iran, a number of EU parliamentarians said in a recent letter in which they slammed a British court decision to remove the MKO from the British terror list.

The EU officials also added that the group has no public support within Iran because of their role in helping Saddam Hussein in the Iraqi imposed war on Iran (1980-1988). Many of the MKO members abandoned the terrorist organization while most of those still remaining in the camp are said to be willing to quit but are under pressure and torture not to do so.

In recent years, high-ranking MKO members have been lobbying governments around the world in the hope of acknowledgement as a legitimate opposition group. The UK initiative, however, prompted the European Union to establish relations with the exiled organization now based in Paris. The European Court of First Instance threw its weight behind the MKO in December and annulled its previous decision to freeze its funds.