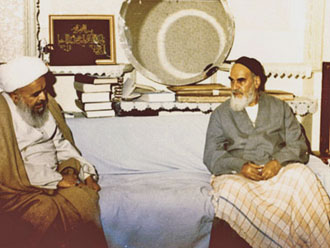 Ayatollah Sadouqi is the fourth martyr of Mehrab (prayer sanction). He was Imam Khomeini’s representative and the Friday Prayer leader of Yzad. In his last Friday Prayer on Ramadhan 10, 1402 (AH) (Tir 11, 1361) July 1, 1982, he became martyr while leaving the prayer place after finishing prayer, a cruel hypocrite approached him and embraced that holy man meanwhile carrying grenade which was exploded later. In this way Ayatollah Sadouqi became martyr, this was a holy return to God.

“Being sacrificed and presenting sacrifice along the path of the revolution and her victory is unavoidable fact especially when it is about the divine revolution… Sacrifice for a great revolution is the sign of victory and achieving predetermined goal.

… Who was the most deserved person to become martyr at the era during which Bani Omayyeh was threatening Islam when there was the innocent son of the Holy Prophet (SW) and his children and his followers and now who is the most deserved one for becoming martyr at the age in which the global arrogance and his servants threaten Islam inside or out side the country, so only people like martyr Sadouqi can deserve such blessing. The great martyr who was always involved actively in all of the fields of revolution and helped the miserable and the needy.

…. These people who have claimed that they seek to serve for the nation but they are in the most remote and isolated areas and at the time of the revolution they looted the arms and ammunitions and were totally active. Now God the Almighty has revealed to us their real identities and made the property and the lives of the people not available for them, they have deprived people of such benefactors (the martyrs) as a retaliatory action.

I have lost a very dear friend whom I knew and I was so familiar with his soul for more than 30 years. Islam has lost a committed man, and also Iran has lost a devoted Islamic scholar. The province of yazd lost a wise head however, it achieved the final aim which was the all of martyrs’ wish.”

SHAHID SADOUQI FROM THE SUPREME LEADER’S POINT OF VIEW

“ This great figure was among the ones who played a noticeable role in the Islamic Revolution of Iran. Among his attributes, which had made him as an influencing character, was his bravery…. In the Beitolmoqaddas Operations he was present and every one watched him in TV and saw how irresistible he was. He was never tired and he was obedient toward Imam. Another point to mention which was interesting was this fact about the essence of his leadership. I found Mr. Sadouqi as the real leader in Yazd.”