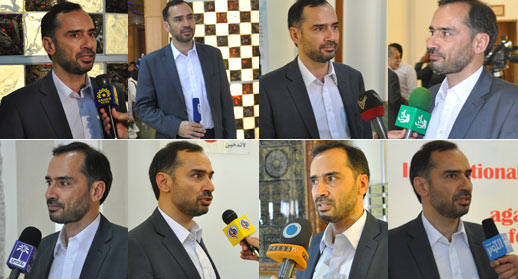 Analyzing the ominous phenomenon of terrorism in Iran, Secretary General of Habilian Association (families of Iranian victims of teror) was interviewed with various TV channels such as Al-Alam, Al-manar, Sahar, Press TV, Al-kosar, Beladi, Turkish Iha, and Al-Forat, on the sidelines of the international conference of the global coalition against terrorism toward just peace.

Talking with satellite channel of Al-Alam, Mohammad Javad Hasheminejad said: Insecurity and instability is one of the most important consequences of terrorism in the region.

Habilian SG considered the presence of Foreigners and occupiers one reason for spread of terrorism in the region, adding: Coalition Countries and the leading scholars of human rights issues and peace and fighting against terrorism can be an important step in stabilizing the region.

In another interview with Lebanese Al-manar network, Hasheminejad expressed a history of Habilian Association’s activities in fighting against terrorist grouplet of Hypocrisy.

Introducing Islamic Republic of Iran as the biggest victim of terrorism, Secretary General of Habilian Association said: terrorist groups have assassinated 17000 children of Iranian Nation, 12000 of them have been assassinated by MKO.

The international conference of the global coalition against terrorism toward just peace was held on May 14 and 15.