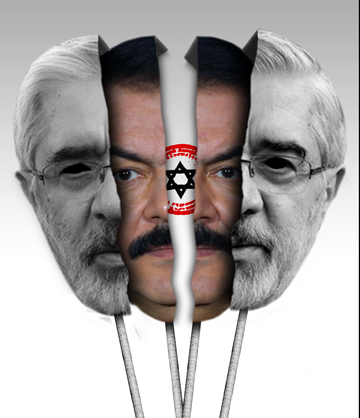 One of the members linked to former Iranian presidential candidate Mir-Hossein Mousavi's headquarters who has had extensive cooperation with the terrorist group Mujahedin Khalq Organization (MKO) has been apprehended.

The arrestee had been operating under the pseudonym Benjamin, reported Fars news agency on Monday.

According to the report, he organized the street protests following the June 12 Iranian presidential election in 2009.

He was once arrested in one of the post-election disturbances, but released a week later, it added.

After Benjamin was freed, he was introduced to the MKO by one of the key agents of the terror group at Mousavi's headquarters who is on the run at the moment.

He was then contacted by one of the MKO ringleaders overseas and received special training courses afterwards.

Benjamin was then entrusted with different missions by the MKO. In his first move, Benjamin formed a secret network with post-election agitators to carry out MKO's missions.

The MKO is headquartered in Iraq's Ashraf military base. French-backed MKO ringleader Maryam Rajavi lives in that country. The Baghdad government has vowed to evacuate the military base and expel the MKO members. This has not happened yet as the United States is opposed to the idea.

Nonetheless, the European Union took the MKO off its blacklist in 2009.

The European Parliament has also urged Washington to remove the MKO from its list of foreign terrorist organizations.

The MKO is also known to have cooperated with Iraq's executed dictator Saddam Hussein in suppressing a 1991 uprising in southern Iraq and the massacre of Iraqi Kurds.