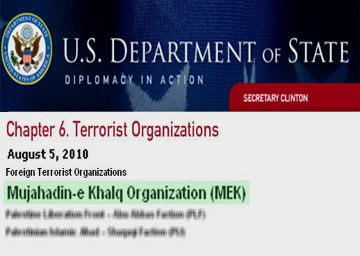 Despite all the vast propaganda campaign and pulling any lobbying string, while leaving no stone unturned, for taking the name of MEK out of the US State Department terror list, once again this terrorist group was designated as a foreign terrorist organization.

In a new report by the US Department of State office of the coordination for counterterrorism which was released on August 5, 2010, Mujahedin-e Khalq Organization was referred to as a terrorist organization.

The MEK was originally designated as a Foreign Terrorist Organization on October 8, 1997. The MEK is a Marxist-Islamic Organization that seeks the overthrow of the Iranian regime through its military wing, the National Liberation Army (NLA), and its political front, the National Council of Resistance of Iran (NCRI).

The MEK was founded in 1963 by a group of college-educated Iranian Marxists who opposed the country’s pro-western ruler, Shah Mohammad Reza Pahlavi. The group participated in the 1979 Islamic Revolution that replaced the Shah with a Shiite Islamist regime led by Ayatollah Khomeini. However, the MEK’s ideology – a blend of Marxism, feminism, and Islamism – was at odds with the post-revolutionary government and its original leadership was soon executed by the Khomeini regime. In 1981, the group was driven from its bases on the Iran-Iraq border and resettled in Paris, where it began supporting Iraq in its eight year war against Khomeini’s Iran. In 1986, after France recognized the Iranian regime, the MEK moved its headquarters to Iraq, which facilitated its terrorist activities in Iran. Since 2003, roughly 3,400 MEK members have been encamped at Camp Ashraf in Iraq.

In 1981, MEK leadership attempted to overthrow the newly installed Islamic regime; Iranian security forces subsequently initiated a crackdown on the group. The MEK instigated a bombing campaign, including an attack against the head office of the Islamic Republic Party and the Prime Minister’s office, which killed some 70 high-ranking Iranian officials, including Chief Justice Ayatollah Mohammad Beheshti, President Mohammad-Ali Rajaei, and Prime Minister Mohammad-Javad Bahonar. These attacks resulted in a popular uprising against the MEK and an expanded Iranian government crackdown that forced MEK leaders to flee to France. For five years, the MEK continued to wage its terrorist campaign from its Paris headquarters. Expelled by France in 1986, MEK leaders turned to Saddam Hussein’s regime for basing, financial support, and training. Near the end of the 1980-1988 Iran-Iraq War, Baghdad armed the MEK with heavy military equipment and deployed thousands of MEK fighters in suicidal, mass wave attacks against Iranian forces.

The MEK’s relationship with the former Iraqi regime continued through the 1990s. In 1991, the group reportedly assisted the Iraqi Republican Guard’s bloody crackdown on Iraqi Shia and Kurds who rose up against Saddam Hussein’s regime. In April 1992, the MEK conducted near-simultaneous attacks on Iranian embassies and installations in 13 countries, demonstrating the group’s ability to mount large-scale operations overseas. In June 1998, the MEK was implicated in a series of bombing and mortar attacks in Iran that killed at least 15 and injured several others. In April 1999, the MEK targeted key Iranian military officers and assassinated the deputy chief of the Iranian Armed Forces General Staff, Brigadier General Ali Sayyaad Shirazi.

In April 2000, the MEK attempted to assassinate the commander of the Nasr Headquarters, Tehran’s interagency board responsible for coordinating policies on Iraq. The pace of anti-Iranian operations increased during “Operation Great Bahman” in February 2000, when the group launched a dozen attacks against Iran. One attack included a mortar attack against a major Iranian leadership complex in Tehran that housed the offices of the Supreme Leader and the President. In 2000 and 2001, the MEK was involved in regular mortar attacks and hit-and-run raids against Iranian military and law enforcement personnel, as well as government buildings near the Iran-Iraq border. Also in 2001, the FBI arrested seven Iranians in the United States who funneled US$ 400,000 to an MEK-affiliated organization in the UAE, which used the funds to purchase weapons. Following an initial Coalition bombardment of the MEK’s facilities in Iraq at the outset of Operation Iraqi Freedom, MEK leadership negotiated a cease-fire with Coalition Forces and surrendered their heavy-arms to Coalition control. Since 2003, roughly 3,400 MEK members have been encamped at Ashraf in Iraq.

In 2003, French authorities arrested 160 MEK members at operational bases they believed the MEK was using to coordinate financing and planning for terrorist attacks. Upon the arrest of MEK leader Maryam Rajavi, MEK members took to Paris’ streets and engaged in self-immolation. French authorities eventually released Rajavi. Although currently in hiding, Rajavi has made “motivational” appearances via video-satellite to MEK-sponsored conferences across the globe.

According to evidence which became available after the fall of Saddam Hussein, the MEK received millions of dollars in Oil-for-Food program subsidies from Saddam Hussein from 1999 through 2003. In addition to discovering 13 lists of recipients of such vouchers on which the MEK appeared, evidence linking the MEK to the former Iraqi regime includes lists, as well as video footage of both Saddam Hussein handing over suitcases of money to known MEK leaders, and of MEK operatives receiving training from the Iraqi military.

Estimates place MEK’s worldwide membership at between 5,000 and 10,000 members, with large pockets in Paris and other major European capitals. In Iraq, roughly 3,400 MEK members are gathered at Camp Ashraf, the MEK’s main compound north of Baghdad. As a condition of the 2003 cease-fire agreement, the MEK relinquished more than 2,000 tanks, armored personnel carriers, and heavy artillery. Between 2003 and 2006, a significant number of MEK personnel voluntarily left Ashraf, and an additional several hundred individuals renounced ties to the MEK and been voluntarily repatriated to Iran.

The MEK’s global support structure remains in place, with associates and supporters scattered throughout Europe and North America. Operations target Iranian government elements across the globe, including in Europe and Iran. The MEK’s political arm, the National Council of Resistance of Iran, has a global support network with active lobbying and propaganda efforts in major Western capitals. NCRI also has a well-developed media communications strategy.

Before Operation Iraqi Freedom began in 2003, the MEK received all of its military assistance and most of its financial support from Saddam Hussein. The fall of Saddam Hussein’s regime has led the MEK increasingly to rely on front organizations to solicit contributions from expatriate Iranian communities.