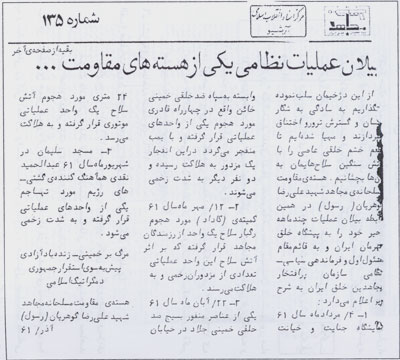 In page 13, no. 135 of Mujahed (MKO’s official weekly), under an article entitled “Report of Military Operations of a Resistance Group”, the anti-Iran terrorist Mujahedin-e Khalq Organization (MKO, aka MEK/PMOI) confessed to several terror attacks:

1. Bombing a cultural exhibition of the anti-people guards [IRGC] in Qaderi crossroad which killed a hireling and injured two others.

In September 1982, Abdolhamid Naqdi was attacked by an operational unit ad injured seriously.

4. Attack on an [Islamic Revolution’s] Committee in October 4, 1982 which killed and injured a number of hirelings.