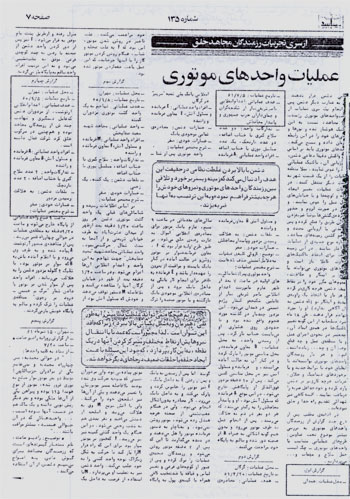 In an article entitled “Some of Mujahedin-e Khalq combatants’ experiences”, appeared in p. 7, no. 135 of Mojahed weekly, the anti-Iran terrorist Mujahedin-e Khalq Organization (MKO, aka MEK/PMOI) confessed to several terror attacks:

In September 27, 1982, at 7 p.m. an MKO motorcycle operational unit shot at Nasser Sharifi Tabar, a member of the Islamic Republic Party office on Hamedan, and his colleague in a barrage to death. Sharifi Tabar had survived several assassination attempts before.

2. Terror attack on two members of the Islamic Revolution’s Committees in Tehran:

“In November 29, 1981, at 1:40 p.m. Martyr Said Safabakhsh operational unit shot at a patrol car in Gorgan St., Tehran, in which a police was killed and another was injured.”